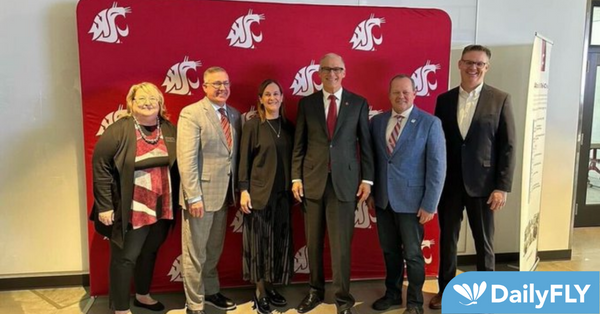 A key to advancing the renewable fuels and clean energy sector in Washington will be the WSU Institute for Northwest Energy Futures, Inslee said, noting that he intends to seek legislative support that’ll fund the hiring of several new professors in the coming years.

The governor said he is proposing about $10 million that would allow for hiring five scientists, including a director of the Institute for Northwest Energy Futures, as well as five graduate students on the WSU Tri-Cities campus. Funds would also go toward leasing to own a building in north Richland over the next four years. The proposal would also fund the addition of three faculty and three graduate students on the Pullman campus.

The vibrant research and development ecosystem found in the mid-Columbia region makes it the perfect place for this institute to take hold, though its impacts will extend far beyond, Inslee said.

“The ultimate source of renewable energy is our capability to innovate.”Washington Gov. Jay Inslee

“The ultimate source of renewable energy is our capability to innovate,” Inslee said, adding the institute and its partners will be driven to explore numerous paths to creating a more sustainable and environmentally just world.

In his remarks, Schulz observed the privilege he has had as the leader of a research university in a state where the Legislature and governor’s office are supportive of research and development endeavors. It’s the kind of support that’s allowed research innovations to flourish across the state.

“This is an opportunity to continue to be national and international leaders in this particular space,” Schulz said.

The ability for WSU Tri-Cities to enhance its clean energy efforts came about as a result of the OneWSU approach, which allows each campus to set priorities based on the conditions within their local communities.

“WSU Tri-Cities is located in mid-Columbia region, which is rich in clean energy resources like hydropower, nuclear energy, wind, solar, ample bio mass and is also approximate to many innovative entrepreneurs,” Haynes said.

The push to launch the WSU Institute for Northwest Energy Futures began last spring with a $500,000 gift from Bob Ferguson, who served as the first deputy assistant secretary of nuclear programs for the U.S. Department of Energy. The gift kicked off a $2 million fundraising campaign for WSU Tri-Cities to hire its first endowed faculty chair in energy and the environment, who will also serve as the center’s leader.

WSU Tri-Cities is looking forward to seeing the center evolve through work with existing partners like PNNL as well as new collaborations that are sure to come as researchers pursue the next generation of clean energy advances. The campus will also continue to educate the future workforce that’ll be critical to turning research findings into realities that benefit Washington residents and those beyond, Haynes said.

Inslee’s full budget proposal, including specific allocation requests, is expected to come out soon, with members of the Washington House and Senate convening in January to begin writing their budget proposals.