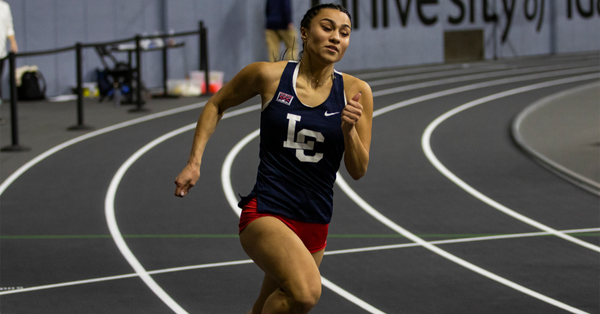 MOSCOW – Anika Grogan continued to impress this season with an LC State record-breaking time in the 200m on Friday at the Lauren McCluskey Memorial Open, hosted by the University of Idaho. She was the lone national-qualifier on Friday, with plenty of action awaiting the Warriors on Saturday.

Grogan highlighted the day for the LC State women with her record-setting performance in the 200m. The junior from Lewiston finished second overall with a provisional-standard time of 25.23. Emily Collins finished 13th (26.35) and Keelyn Pilcher rounded out the top 25 (28.65).

In throws, Grace Osborne threw a career-best 11.60m to shatter her previous personal-record by over a meter. She placed 17th in the weight throw, and Cassidy Henderson was 23rd (9.41m).

Justin Krabbenhoft got off to a strong start in the heptathlon in the 60m dash. The freshman finished first in the event with a personal-best time of 7.21. Christian Bothwell was the top Warrior performer in the heptathlon’s long jump with a career-record mark of 6.52m, and Caleb Moore led LC in the shot put (10.99m) and high jump (1.79m).

Braden Wuthrich hit a personal-best height of 1.88m to finish ninth in the high jump. The mark ties for fifth-best in the LC State record books.