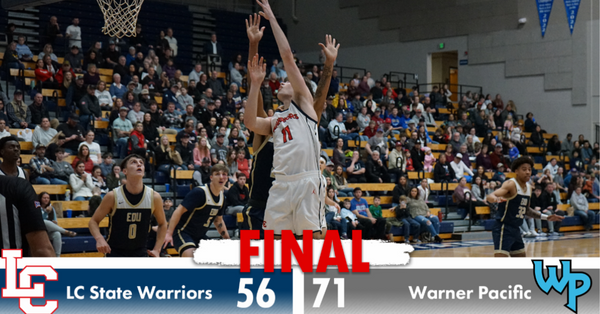 PORTLAND, Ore. – Three Warriors scored in double-digits on Friday, but it was not enough to overcome a 43-point second half by Warner Pacific. LC State Men’s Basketball fell to the Knights 71-56 in Portland.

Freshman Grayson Hunt tallied a career-high 13 points, including 10 in the first half, and Davian Brown led LC with 16 points. The score sat tied 28-28 at the half before WPU took control in the second half.

With the loss, LC State is 6-8 overall and 3-5 in Cascade Conference play.

“Really liked how our guys competed tonight,” Head Coach Austin Johnson said. “We did a lot of good things in some effort categories and took care of the basketball. Ultimately, it’s hard to win when you don’t make shots. We got a lot of good ones both inside and outside, but we weren’t able to convert. We will look to bounce back against a talented and very rested Multnomah team.”

WPU started the scoring with a pair of 3s before Hunt put LC on the board with a layup at 16:43. The Knights netted their third 3 of the game, and Silas Bennion answered with a triple of his own to keep the deficit small at 9-5. Hunt and Oreon Courtney went back-to-back to pull the Warriors within two, 11-9, by 14:06.

Free throws by Erick Chaney and a layup by Bennion pushed the Warrior scoring run to eight before Hunt hit the equalizer to cap the 10-point rally just before the buzzer. The half ended tied 28-28.

Hunt surpassed his previous career-high and put the Warriors in front with an and-one play to begin the second half. Brown capped the run, started in the previous half, at 15 with a layup at 18:33 to make it 33-28 in favor of LC. WPU scored eight straight to regain momentum and the lead, but a 3 by Brown knotted things up 36 each at 17:02.

WPU built its lead to 57-44 by 8:01 and held LC off the board for four minutes. Courtney, Chaney and Lustig tallied three straight baskets to cut the deficit to 57-48 with the help of two steals by Chaney. A three-point play by Brown kept LC within nine, 60-51, with four minutes to play.

The Knights pushed the difference back out to 68-53 under the two-minute mark before closing out the contest 71-56.