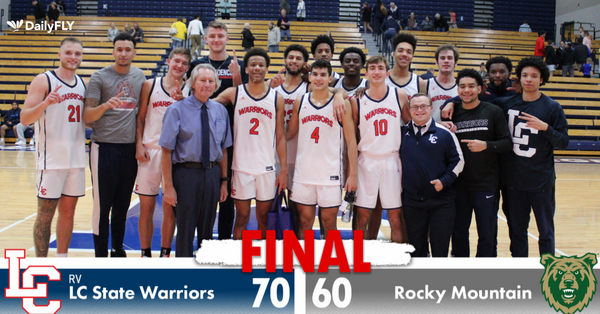 LEWISTON – Davian Brown left no doubt when it came time for vote for MVP of the Clearwater River Casino & Lodge Classic. The sophomore was an offensive force with 24 points to help lead (RV) LC State Men’s Basketball past a strong Rocky Mountain (Mont.) team by a final of 70-60.

The Warriors took down the Battlin’ Bears with a strong second half where they outscored RMC 44-33. LC trailed 27-26 at the half before handing the former Frontier Conference for its first loss of the season.

“Great team win tonight,” Head Coach Austin Johnson said. “Proud of our guys for finding a way without our best stuff; especially in the first half. Davian really carried us to make it close at half and then in the second half we had much better ball movement that allowed for better looks on the perimeter and at the rim. Grayson Hunt took some steps down the stretch and had a few clutch moments which was awesome to see for a freshman. We still have a lot to improve on but I’m encouraged by our progress.”

Keegan Crosby put the Warriors on the board with a triple in the first minute, and Brown followed with a layup to give LC a 5-2 edge at 18:44. Rocky jumped back in front less than a minute later, but Brown drained a free throw after being fouled on a made 3-pointer. Crosby made it a seven-point stretch with a 3 at 10:32 to give LC State a 12-8 lead.

It became a back-and-forth battle throughout the rest of the half with the lead changing hands multiple times. Two free throws by Brown brought LC within one at the half with the score at 27-26 in favor of RMC.

The Bears stretched the margin to four with a 3-pointer to open the second half. A layup by Will Abram sparked a nine-point LC State run that was capped by a 3 by Brown to give the Warriors a 35-30 lead by 15:46. Brown notched another 3-pointer while getting fouled and drained the free shot to make it 39-31 a minute later. Another back-and-forth ensued before Kai Warren struck for back-to-back 3s at 9:44 to push the LC advantage to 52-45.

Crosby netted a 3 with less than six minutes to play to make it a nine-point, 59-50, difference, and free throws by Grayson Hunt kept it there, 61-52, at 4:43. Warren added another triple and Silas Bennion, Oreon Courtney and Hunt all found the basket in the final three minutes to close out the contest 70-60.

Brown led all scorers with 24 points to go with six rebounds. He hit four 3-pointers and was 4-for-6 from the charity stripe. Crosby added 14 points with eight boards, and Courtney led the team with 10 rebounds.