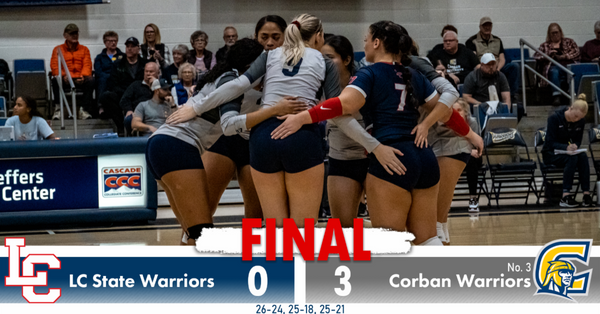 SALEM, Ore. – The Lewis-Clark State Volleyball team took on a Cascade Conference giant on Friday night in Salem in the No. 3 Corban Warriors. LC State battled through a tight first set, but fell in three (26-24, 25-18, 25-21).

LC State is now 12-9 in Cascade Conference play heading into the final match of the regular season.

It was a tight battle in the opening set. Channa Hart tallied a kill before assisting Lisi Langi on a block to give LC a 2-1 edge as the back-and-forth began. Corban maintained a slim edge until another kill by Hart evened the frame 10-10, and one by Carli Berntson made it 15-15. A kill by Berntson and error by the hosting Warriors kept the scored knotted 18-18 before Cassidy Nelson put LC in front with a kill at 19-18.

Corban rallied to take a 23-19 advantage over LC State, but a kill by Langi and block by Jada Wyms and Berntson pulled the Warriors back within two at 23-21. A kill by Grecia Ung Enriquez helped LC fight off a set point, but Corban finished the frame with a 26-24 set win.

The hosting Warriors carried the momentum into the second set and took a quick 9-3 lead. A block by Hart and Nelson pulled LC within three, 11-8, but another Corban rally had the Warriors trailing 16-9. Corban went on to take the frame 25-18.

Nelson tallied the first kill of the third set to give LC some momentum. Wyms and Ung Enriquez tallied back-to-back kills, and Langi added one as part of a five-point run to put LC ahead 6-2. Corban chipped away at the margin to tie things up 13-13 before taking a 16-15 lead.

The Warriors wrap up the regular season on Saturday at Bushnell. First serve is set for 5 p.m. in Eugene, Ore.