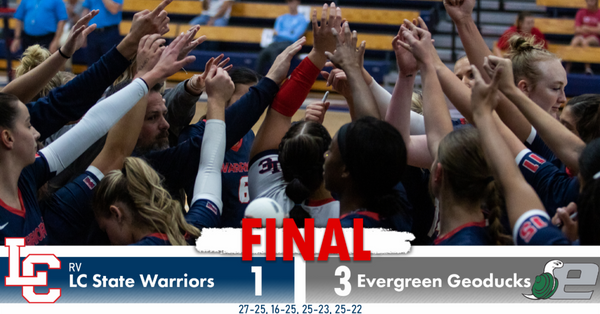 The match started in back-and-forth fashion before a pair of kills by Cassidy Nelson gave the Warriors a 10-7 lead. The Geoducks matched the run to tie things up 10-10 before kills by Jada Wyms, Lisi Langi, Grecia Ung Enriquez, and Juliauna Forgach Aguilar put LC back in front 17-13. Wyms and Forgach Aguilar went back-to-back to push the advantage to 19-14, but a run by TESC sent the set into extra points.

Langi tallied two straight kills to tie the set 24-24, but the Geoducks closed out the set 27-25.

The Warriors turned things around with a strong second frame, starting with a four-point rally sparked by a kill by Nelson. Channa Hart, Wyms, and Ung Enriquez each added a kill in the run. Nelson kickstarted another run of five, adding three kills total in the span, to go with a block by Hart and kill by Langi at 12-7.

Kills by Wyms and Nelson paired with a block by Wyms and ace by Jennah Carpenter to give the Warriors a 10-point cushion at 21-11. Langi closed out the set with a kill at 25-16.

LC State rallied for four points after two by TESC opened the set. Wyms got things started with a kill, Esther Kailiponi added an ace and Nelson capped the run with a terminal swing at 4-2. Two more kills by Langi and a block by Wyms made it 7-3, and another run of four with a kill and ace by Ung Enriquez and kill by Forgach Aguilar made the advantage 13-9.

The Geoducks launched a comeback to take a 19-16 lead, but a kill and ace by Ung Enriquez gave LC back the lead at 22-21. TESC scored the final three points of the set for a 25-23 win.

Evergreen carried the momentum into the fourth frame and took a 7-5 lead. A kill by Carli Berntson and ace by Ung Enriquez tied the score 7-7, and kills by Wyms and Langi made it 14-10 in favor of the Warriors. The Geoducks utilized a five-point rally to jump ahead 23-20 before closing things out 25-22.