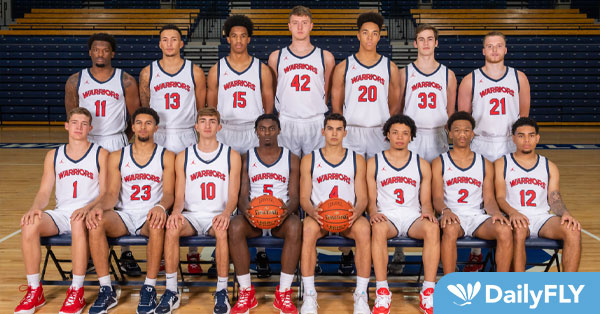 LEWISTON, Idaho – The fifth season under coach Austin Johnson brings a new look to the Lewis-Clark State Men’s Basketball team. The 2022-23 squad features eight new faces on the roster with seven returners that will bring a strong mix of talent to the court this year.

The Warriors were picked to finish third in the Cascade Conference in the preseason poll, released on Wednesday. LC State received one first-place vote and114 points, with College of Idaho leading the way with 11 first-place votes and 143 points. Oregon Tech was predicted to finish second with 127 points.

“There is a lot of teaching and learning in regards to having so many new guys and getting them on the same page of how we do things as a program,” Johnson said. “I think a great benefit is that we have some big leadership opportunities for the returners to step into. There is also a lot of excitement about having so many new guys and creating our own identity offensively and defensively. Every year is a new adventure with a new group. The challenge of so many new guys is getting them to understand the urgency needed to win at this level and how hard it is to stay consistent with our approach.”

Sophomores Silas Bennion and Oreon Courtney lead the group of returners as the most experienced Warriors on the squad. Both earned more than 20 starts last season, with Bennion leading the team in assists (111) and Courtney leading in rebounding (6.99 per game). Courtney earned First-Team All-Cascade Conference accolades for his contributions.

“We need them (Silas and Oreon) to play with great urgency and toughness,” Johnson explained. “They will be relied on heavily both offensively and defensively; we can’t afford for them to have off nights in terms of their toughness, composure and confidence. They’ll need to be as consistent as possible. We are challenging them to be more vocal as well. They’ve both played in some big-time games and have experienced both high-level success and lesson-learning failures. They need to be an anchor for us on the court and in the locker-room. We demand a lot from our returners and these two will need to have great seasons for us to be successful. I believe they are ready and capable.”

Sam Stockton, Will Abram and Brennen Newsom, along with Bennion and Courtney, were role players on the National Runner-Up team from the 2020-21 season. Stockton saw his playing time increase last season and made seven starts. He was second on the team in steals with 29. Abram came into his own late in the season when injuries forced the big into crucial situations. Newsom will redshirt the season due to a preexisting injury.

Highlighting the group of new faces is transfer, Crosby. Last season for the Seawolves, the senior started all but one contest and led the GNAC with a 2.6 assist/turnover ratio. He averaged 5.9 rebounds per game to rank 12th in the conference.

“Keegan Crosby has fit in quickly and fit in well,” Johnson said. “He gives us what we are looking for in a versatile forward position. As a sixth-year senior he has also stayed very coachable which isn’t always easy to do when you’ve had such a long college career. We expect Davian Brown and Quentin Raynor to give us firepower on the perimeter as scorers and playmakers; this will also hopefully create some space for guys like Oreon to operate.”

Lustig, the three-time Northeast 2B League MVP, averaged 30 points per game at Colfax HS and helped the team to the 2021 district title. He will join fellow freshman Anthony Peoples Jr. as key pieces to the Warriors’ success this season. Peoples Jr., from Eastvale, Calif., prepped at powerhouse Centennial High School in Corona, Calif., and helped lead the team to the 2021 CIF State Championship and three league titles.

“John Lustig and Anthony People Jr. will need to step into productive roles for us with the current makeup of our roster,” Johnson added. “Though they’re freshman, they’ll need to be ready to go and be impact players and learn on the fly. If they can get up to speed defensively I think they’ll each be impact freshmen.”

As a team that is no stranger to adversity, the Warriors have already felt the sting of injuries. Both Newsom and transfer Etan Collins will sit out the year due to ailments prior to the first game of the year.

“Unfortunately, we have already been hit by a couple of season-ending injuries which will dramatically impact how we play, but I am confident our guys will adjust,” Johnson explained. “Like every other year, this team will have identity-defining opportunities in adverse situations; I am excited to see what decisions they make in those moments and who they’ll become by them.”

Johnson’s Warriors will hit the ground running with an exhibition against the semi-professional Seattle Mountaineers on Oct. 21. The team will then travel south to take on Arizona Christian, a team that ended its season in the NAIA Men’s Basketball National Semifinal.

LC State will play its first official game at home on Nov. 3 as part of the Clearwater River Casino & Lodge Classic when the Warriors face Park Gilbert (Ariz.). The weekend will wrap up on Nov. 5 when LC plays former Frontier Conference opponent Rocky Mountain (Mont.). The rematches with former conference foes will continue the next weekend when the Warriors take on Providence (Mont.). The Frontier crossover action will wrap up in Butte, Mont., when LC takes on both Montana Tech (ranked No. 14 in the final poll last season) and Providence at the Montana Tech Fall Classic.

“This will be the toughest non-conference schedule LC has played during my time as both a head coach and an assistant,” Johnson explained. “We’ll play some big-time true road games against national tournament opponents and will host some great programs as well. We’ll know right out of the gates where we fit and how we can improve. Our opening exhibition will be against a very talented team of former college players with some still playing professionally. They’ll be a great way to start before we open at ACU which should be a top-five team to begin the season.”

Cascade Conference play kicks off on Nov. 22 when LC State hosts Walla Walla University. The Warriors will hit the road for contests at Northwest and Evergreen on Dec. 2 and 3, then take on Corban and Bushnell in Oregon on Dec. 17 and 18.

LC State returns home for a weekend of strong competition between Eastern Oregon and College of Idaho, who finished its season in Kansas City, Dec. 30 and 31. The Warriors will host Oregon Tech on Jan. 13 before taking on Southern Oregon in a rematch of last season’s CCC tournament semifinal on Jan. 14.

“The CCC is a great league that has consistently proven it on the national level,” Johnson said. “Over the last four or five years the postseason performance from teams like Oregon Tech, College of Idaho and us here at LC has been pretty elite. The league will be better than it ever has with so many well-coached programs that also recruit at a big-time level. You could be a fifth-place team in the CCC and still be a pretty talented, successful team.

“There’s no margin for error,” Johnson continued. “We’ll play half our league schedule at a significant recovery/prep disadvantage so our guys will need to be exceptionally tough and together to give us a chance. As always, our goal is to be playing our best basketball towards the end of the season. We’ve done that the last few years and will be aiming for that goal this year.”