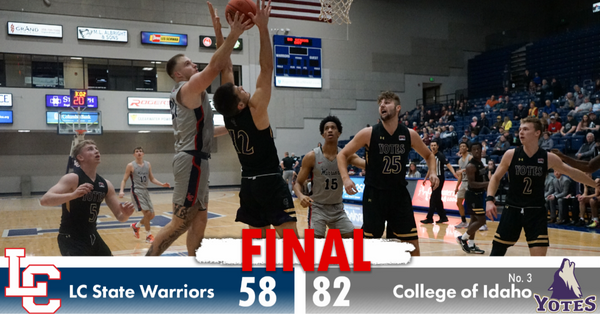 LEWISTON – No. 3 College of Idaho Men’s Basketball proved why it is a top-five team in the NAIA on Saturday with an 82-58 defeat of LC State. The Warriors closed out the 2022 portion of their schedule with a 6-7 record overall and 3-4 in Cascade Conference play.

The Warriors outscored C of I in the second half, 38-34, but a 48-20 first half was enough for the Yotes to take the contest.

“C of I showed why they’re ranked so high and in the hunt for a championship,” Head Coach Austin Johnson said. “It was a challenging weekend for us on all fronts, but I am excited to see how we respond this next week.”

LC State regained its footing in the second half, starting with a jumper by Oreon Courtney. Points from freshmen Grayson Hunt and John Lustig added up to a short four-point burst, and another small run with points from Courtney and Lustig had the deficit at 51-30 at 14:47.

The 21-point margin was the smallest of the half, despite eight points from Lustig in the final six minutes. Erick Chaney added a triple, Joel Meske tallied four points, Will Abram added two and Sam Stockton knocked down free throws as the game wound down.

Courtney and Lustig each tallied 12 points in the contest, with all of Lustig’s coming in the second half on a 10-10 performance from the free throw line. Courtney led the defense with seven rebounds.

The Warriors hit the road to open 2023 with CCC contests Jan. 6 and 7. LC State will take on Warner Pacific first before facing Multnomah.