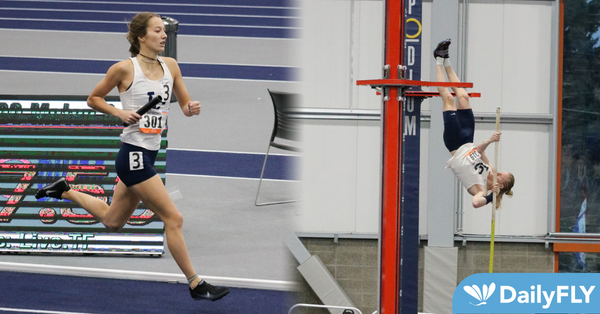 Lewiston, Idaho – (Release from Lewis-Clark State College Athletics) A new season will begin for LC State Track and Field on Dec. 10 when the Warriors travel to Spokane for the Spokane Invitational. LC returns a strong contingent of young talent, as well as a few mainstays that made major leaps last season.

“Chemistry looks great,” Head Coach Mike Collins said. “Every year has a different vibe and different feel. This year is no different, but we returned a lot of great athletes that accomplished a lot last year and want to do even more this year and that type of attitude tends to overflow into our new kids. So exciting to see how that will gel as the season progresses.”

THE WOMEN
The Warrior women return a lot of speed and skill from last season. LC State returns half of its All-Americans from last season in javelin thrower Kea Stieglitz, distance runner Geraldin Correa and high jumper Jennah Carpenter. Carpenter had a standout season as a freshman when she set the school record in the indoor high jump and outdoor high jump and long jump. The Lewiston native took home the Cascade Conference title in the high jump before going on to earn All-American status with a sixth-place finish in the event.

Carpenter joins Anika Grogan, Madigan Kelly and Emily Collins as a strong quartet of former Bengals. The Lewiston High School grads bring a lot of speed to the track. Grogan set the program record in the 60m, 200m and 400m last indoor season, then did the same in the 200m and 400m in outdoor. She earned all-conference accolades in the 400m, 200m and 4x400m relay. Kelly, another freshman standout last season, rewrote the hurdle records for LC State. She set LC bests in the indoor 60m hurdles in each of her first three meets, then also set the mark in the outdoor 100m hurdles. She earned all-conference honors in the 100m hurdles and 4x400m relay. The group brought a lot of chemistry to the team last season that will only increase this year with the addition of Collins. Orofino native Sydnie Zywina also had a strong freshman campaign and set Warrior records in the indoor and outdoor triple jump. She earned all-conference honors in the event.

“We love our locals,” Head Coach Mike Collins said. “They have been taught well before we got them, so working to keep them moving forward and improving is our main focus. They have so much comradery with each other that it flows over into others, so they are helping to improve those around them.”

The addition of Collins is special for the team for multiple reasons. She is rejoining her high school teammates, has a stacked high school resume, and is the daughter of coach Mike Collins and Head Athletic Trainer Tracy Collins. The freshman has her name next to multiple records at LHS, and is second in a few behind her mother.

“Having Em on the team is truly a joy,” Mike Collins said. “I really didn’t know where she would choose to go after high school and feel very privileged that she chose to stay here. Every one of my coaching peers that have had their children compete for them have expressed how wonderful it is to be a part of it. I am sure I will feel the same way. I am biased, but she is a great kid, brings a lot to the table and I know she will give everything she has when she is out there.”

All-Americans Stieglitz and Correa also return for LC State. Stieglitz has captured two All-American honors in the javelin in her career, so her focus will mainly be on the spring. Correa, the only returner from the 4x800m relay last season, had a breakout cross country season. She was the 800m champion for the CCC last season and earned all-conference accolades this year in cross country along with teammate Brooklyn Shell.

“We have high expectations for Geraldin, ‘Miss G,’ as well,” Collins said. “She was really coming on strong last spring in track, then this fall in cross country before getting sick the week of nationals. I have no doubt she would have been an All-American there if not for that, so I think she is very motivated. Brooklyn and our group of freshmen should be fun to watch too.”

Upperclassmen Sara Hathaway and Cynthia Smith made great strides last season en route to all-conference honors. Hathaway stepped up her game in the hurdles, as well as sprints, to earn All-CCC honors in the 4x400m relay and 400m hurdles. Smith did the same in the pole vault and finished second at the conference meet.

“I think Sara and Cynthia surprised themselves a little, but now know they have what it takes to really perform well,” Collins added.

THE MEN
The Warrior men return two All-Americans in Nikolous Bertling and Connor Turpin. Both are in their final years of eligibility after taking the fifth year offered by the NAIA. Turpin has mastered the art of extreme long distance running as an All-American in the marathon (2021) and half marathon (2022). The NAIA will not offer the event this year. Bertling had a breakout season last year and became the school-record holder in both the indoor and outdoor pole vault. He became the first LC State Men’s Track and Field athlete to earn All-American status in pole vault after placing sixth at nationals.

“I think Nik is really focused on returning to that All-American podium,” Collins explained. “He got enough of a taste that he is going to be looking for more.”

The cross country season showed that there is a lot of potential in the distance group heading into the season. There were questions as to who would up and lead the team with the departure of Cole Olsen, Clayton VanDyke and Chase Barrow, and the Warriors found multiple answers. Carter Gordon stepped up as one of the team’s top runners and was the top LC State finisher at nationals. The Warriors mixed up the top five in nearly every race.

The Warriors had multiple freshmen showcase their talents last season and make marks in the record book including Ian Gardom and London Kirk. Gardom earned the top spot in the outdoor triple jump, and Kirk etched his name at the top of the indoor 200m, as well as the outdoor 100m and 400m. Ike Hopper also put together a strong season to build off of after earning all-conference honors in the 110m hurdles, 400m hurdles and 4x400m relay. His performance in the 400m hurdles at the conference meet set a school record.

Christian Bothwell brings the most returning talent to the squad in combined events. In 2022 he became the first LC State athlete, male or female, to earn All-Cascade Conference honors in the decathlon with a third-place finish at the conference meet.

THE SCHEDULE
LC will spend the majority of the indoor season in Spokane at The Podium. All but one meet currently on the schedule will take place at the state-of-the-art indoor facility, with the outlier being the Lauren McCluskey Memorial Open in Moscow.

The Warriors will compete once in 2022, at the Spokane Invitational on Dec. 10, then will take a few weeks off for winter break. LC State will return to action Jan. 13-14 at the Spokane Indoor Challenge before competing at the Kibbie Dome on Jan. 21. Whitworth University will host an event at The Podium on Jan. 28.

WSU has a combined event scheduled for Feb. 2-4, and the regular season concludes Feb. 10-11 at the Whitworth Invite. The 2023 NAIA Indoor Track and Field Championships will take place in Brookings, S.D., March 2-4.

The outdoor season is scheduled to begin on March 18 at the Sam Adams Classic. The first four meets of the season will be held at Whitworth. The Cascade Conference Multi Championships will be held in Ashland, Ore., on April 20-21, and the regular season will come to a close on May 6 in Portland.

The Cascade Conference Track and Field Championships, presented by U.S. Bank, is scheduled for May 12-13 in La Grande, Ore., and outdoor nationals will be in Marion, Ind., May 24-26.