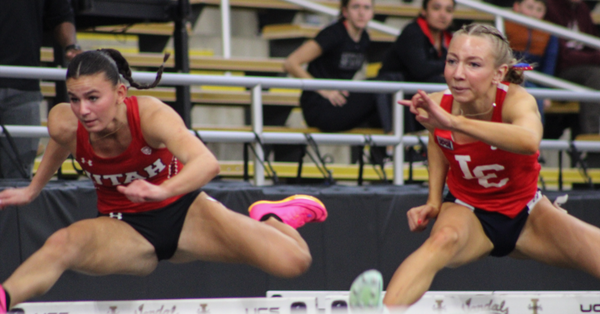 MOSCOW – The Warriors rewrote the record books on Saturday at the Lauren McCluskey Memorial Open at Idaho. LC State student-athletes did not just break records, they shattered them.

LC State Track and Field saw six records fall, some of them twice, and tallied two A standards and a pair of B standards throughout the day.

Lewiston native Madigan Kelly highlighted the day with a pair of records, both of which she broke twice, and an automatic-qualifying time in the 60m hurdles.

Kelly upped her A standard in the 60m hurdles with a time of 8.70, bettering her previous best (8.92) by more than two-tenths of a second. 8.70 is currently the sixth-best time in the NAIA. The Lewiston product ran a time of 8.74 to win the prelims before gaining speed to finish second in the final. Sara Hathaway ran a B standard time of 9.05 for a personal-best in the 60m hurdles. She was fifth in the prelims and sixth (9.13) in the final.

Kelly went on to dominate the 60m dash and set the program record twice along the way. She ran a time of 7.93 in the prelims to place seventh, then took fifth in the final with a time of 7.90.

Orofino native Sydnie Zywina bettered her LC State record in the triple jump with a distance of 11.01m. She placed seventh in the event.

Kea Stieglitz hit a PR in the shot put to lead the Warrior women with a mark of 9.84m. She finished 23rd and Grace Osborne was 24th (9.71m). Both Emberlynn Mack and Desiree Winslow each hit a career-best in the pole vault. Mack placed seventh at 3.01m and Winslow was ninth (2.86m).

The quartet of Collins, Hathaway, Elison and Keelyn Pilcher ran a time of 4:02.70 in the 4x400m relay to finish eighth.

London Kirk continued his strong season with a program-record and automatic-qualifying time of 48.10 in the 400m. The time is faster than his previous best (49.06) by nearly one second and currently the fourth-fastest in the NAIA this season. The Deary native finished second in the race with Ike Hopper in 13th (51.04).

Freshman Jedidiah Barnaby ran a career-best 60m dash to take over the top spot in the LC State record books. He placed third overall with a time of 7.11. Fellow freshman Jordan Castillo was 16th (7.46) and Nikolous Bertling was 18th (7.53.). Barnaby went on to take 14th in the second round of the event (7.18).

Distance runner turned field athlete Trenton Johnson upped his school record in the triple jump. He leapt a distance of 13.61m in his first attempt of the day to take third in the event.

Johnson’s cross country teammate Carter Gordon hit the provisional mark in the 600m with a personal best time of 1:21.48. The mark is second-fastest in the event at LC State and earned Gordon a fifth-place finish. Cooper Carlson was ninth (1:25.30).

Both Caleb Moore and Christian Bothwell PRed in the 60m hurdles and pole vault portions of the heptathlon. Both hits marks of 4.15m in the pole vault, with Bothwell taking fifth and Moore sixth based on attempts. Moore finished eighth (8.82) and Bothwell was 15th (9.07). The pair led LC State in the final heptathlon standings with career-highs. Bothwell finished sixth with 4,589 points and Moore was 12th with 4,407. Moore PRed in five-of-seven events. Ian Gardom finished 18th (3,661).

Both Bothwell and Moore hit the minimum needed to qualify for nationals. Selection is based on the national standings at the end of the regular season.

The team of Kirk, Gordon, Johnson and Hopper ran the second-fastest 4x400m relay in program history with a time of 3:24.09.