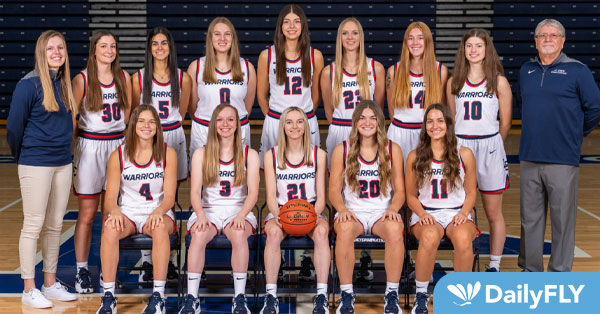 LEWISTON, Idaho – The Warrior women will hit the ground running for the 2022-23 season with a matchup against one of the nation’s best on Saturday. Ranked No. 22 in the NAIA Women’s Basketball Preseason Coaches’ Top 25 Poll, Lewis-Clark State will open the season at home with No. 2 Westmont (Calif.). The Warriors return four of five starters from last season, including the reigning Cascade Conference Player of the Year and All-American Callie Stevens.

Head Coach Brian Orr enters his 22nd season at the helm of the Warrior women after earning his 500th career victory last season.

LC State was picked to finish first in the Cascade Conference preseason poll with six of 11 possible first-place votes. The Warriors edged Eastern Oregon by three points, with the Mountaineers earning the other five first-place votes.

The Warriors sit in a different position heading into this season as compared to last year. Entering 2021-22, LC State did not return a starter, or any player with more than 14 minutes per game. The Warrior women stunned the CCC and became a powerhouse that showcased a bright future for LC State that rocketed their way to a conference title and national tournament appearance. The fresh faces of last year and now confident, seasoned veterans waiting for another shot at a national run.

“Confidence comes from proven performance, and success in basketball has a direct correlation to a team’s overall confidence,” Orr explained. “Last year we had a magical regular season. Nearly every game, we played with a collective confidence that rarely waivered and no matter the score, we always believed we were going to win. This year’s team could be even stronger both mentally and physically, but nothing is guaranteed. Last year after being picked to finish fourth in the conference, and knowing I picked us to finish first, we started with a chip on our shoulder because we knew there were coaches picking us to finish fifth, sixth or lower.

“This year we were picked first and everyone’s expectations are high,” Orr continued. “But this is a new team, a new season, and it’s a completely different mentality, when you go from the hunter to the hunted. We will need to adjust to that challenge.”

Along with Stevens, the Cascade’s leading scorer a year ago at 18.3 points per game, the Warriors maintained the conference’s leading rebounder in Maddie Holm (10.2 rebounds per game). The two earned First-Team All-Cascade Conference accolades, while senior Sara Muehlhausen garnered All-CCC Honorable Mention honors after leading the conference in blocks with 65.

The trio returns, along with senior Hannah Broyles, as the top four scorers from last season. Broyles has made the most strides on the team in the offseason, according to Orr. A competitive program, every stat is tracked in practice and the Moscow native leads in nearly every category. The senior averaged 9.5 points per game last season and was second on the team with 42 steals. Her 3-point output was second only to Stevens with 54.

“So far, Hannah is tearing it up in practice,” Orr said. “She’s shooting lights out from 3-point range and this year she is attacking off the dribble which makes her much harder to defend. The fact that she is healthy and in great shape physically is definitely a factor in her improvement. But her confidence has also been fueled by her understanding of our defense and offensive system. In turn, she has really stepped up as a leader and her intensity every day has helped set the tone with her teammates.”

The team’s leader in assists last season, senior Adyson Clabby, appeared in all 31 games and made three starts in her first season at LC. Sophomores Ellie Sander and Mataya Green are coming off strong freshman campaigns that put all three in the hunt for the fifth starting role.

“Our four returning starters have all come back as better players and we will be counting on their leadership especially early in the season,” Orr said. “Senior Adyson Clabby played starters minutes last year and is competing for that starting position this year. Also competing for that same starting spot is sophomore Ellie Sander, who is arguably the team’s best overall athlete. Our other sophomore, Mataya Green played key minutes last season was finally cleared for competition this week, so she will need some time to get herself back into playing shape.”

“All of our freshmen bring something positive to table and we really expect them to play key minutes,” Orr explained. “Generally speaking, freshmen minutes usually get limited because of defense. With that said, Payton and Lindsey are both really strong and they are probably most ready to have success on the defensive end. But Sitara plays with great energy and can score and rebound. Ella is the best long-range shooter, can play off the dribble and she makes good decisions. The difficult thing is we come out of the gate playing tough teams and every game is important. But like all newcomers, their roles are expected to increase throughout the season.”

LC State will take on a tough opponent to open the season in second-ranked Westmont on Oct. 29. The visiting Warriors advanced to the NAIA’s Round of 16 last season after taking the national title in 2020-21.

The top-25 matchups don’t stop there. The Warriors will follow up the contest with Westmont with a pair of games against No. 25 Rocky Mountain College (Mont.) on Nov. 4 and 5. LC State will face off with former Frontier Conference rival No. 4 Carroll on Dec. 9. Last time the two met was in the 2021 NAIA Opening Round title game where the Warriors upset the Saints 76-67 at home.

In other non-conference action, the Warrior will face Montana Tech and NCAA Division III George Fox.

“Westmont, Rocky and Carroll will be highly ranked teams, but every team on our non-conference schedule is going to be a challenge,” Orr said.

The Warriors open Cascade Conference play at home on Nov. 22 against Walla Walla, then hit the road to take on Northwest and Evergreen State on Dec. 2 and 3. EOU, the only team to beat LC during the regular season, will be in Lewiston on Dec. 30, and the Warriors will battle SOU in a rematch of the CCC tournament title game in the P1FCU Activity Center on Jan. 14.

“With EOU’s new transfers and returning roster, it is easy to see why they got five first-place votes, and on paper this could be their best roster ever,” Orr stated. “Of course, for our players, SOU is the big matchup, simply because of the loss on our home court in the championship game. Bushnell has a number of key returners back and they also picked up some portal transfers from NCAA DII, and OIT picked up a DI transfer as well. The College of Idaho got a lot better by adding a 6-3 junior college transfer who can really play. It looks like everyone in the CCC got better.”