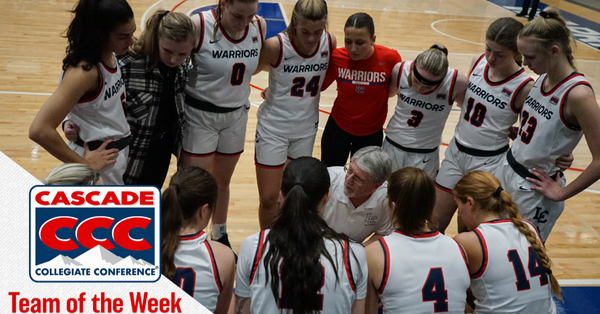 CORVALLIS, Ore. – The No. 10 Warrior women earned their second straight Cascade Conference Under Armour Team of the Week honor, announced by the conference on Sunday. LC State Women’s Basketball earned the final weekly team honor of 2022, and the first of 2023 after defeating No. 20 Eastern Oregon and in-state rival College of Idaho to take sole possession of first place in the CCC standings. LC is now 12-1 on the season and 7-0 in CCC play.

The Warriors earned a pair of victories to close out 2022 with a 71-69 win over EOU before capping the weekend with a 60-53 defeat of C of I. LC State showed that any player is capable of stepping up on any given night, with Ellie Sander leading the team on Friday and Maddie Holm doing so on Saturday. Sander led LC in scoring against EOU with 19 points, and Holm notched a big double-double against C of I with 21 points and 14 rebounds.

LC State held the Mounties, the best shooting team in the CCC, to its lowest field goal percentage of the season (.346). The Warriors put the conference’s toughest defense on display in order to do so. LC currently leads the Cascade in field goal percentage defense (.320), rebounding (46.2 per game), blocks per game (4.7) and turnover margin (18.7). The Warriors rank eighth in the NAIA in blocks per game and ninth in rebounding.

Senior Sara Muehlhausen leads the CCC in blocks (33) and blocks per game (2.5) and Adyson Clabby is the leader in assist/turnover ratio (3.6).