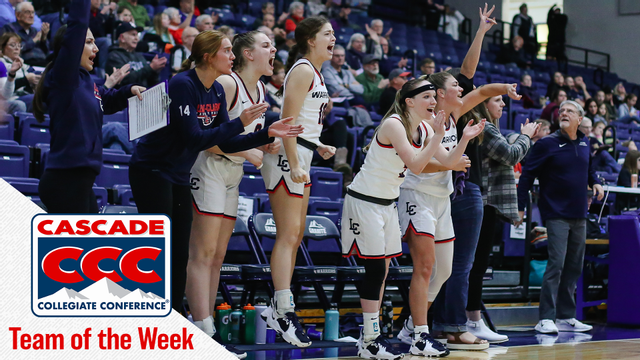 CORVALLIS, OR – The Lewis-Clark State College Women’s Basketball team was named the Under Armour Team of the Week for Dec. 12-18, the Cascade Collegiate Conference announced Sunday.

The No. 10-ranked Warriors (10-1, 5-0 CCC) grabbed two wins over the weekend to remain perfect in conference action and extend their winning streak to 10 games. It keeps LC State tied for first in the CCC standings through five games.

LC State opened with a 71-59 road win over Corban University in a battle of the Warriors. LC had to battle back after Corban jumped out to a 9-3 lead to open the game but put together a strong second quarter (25-10) to take control of the game. Callie Stevens led LC State with 20 points, while Ellie Sander followed with 15 points (7-for-16) and Payton Hymas (5-for-10) chipped in 12 points.

On Sunday, the Warriors capped the weekend with a 74-58 victory over Bushnell University to hand the Beacons their first conference loss of the season. Hannah Broyles came up big for the Warriors, posting 23 points on 7-of-12 shooting, including a 5-of-6 performance from beyond the arc. Maddie Holm grabbed a double-double with 11 points and 15 rebounds, while Sander also added double-digit points with 12 in the game.

The Warriors have a big test in front of them as they host No. 20-ranked Eastern Oregon University on Friday, Dec. 30, for the top spot in the conference standings. Both LC State and EOU have undefeated CCC records coming into the contest.