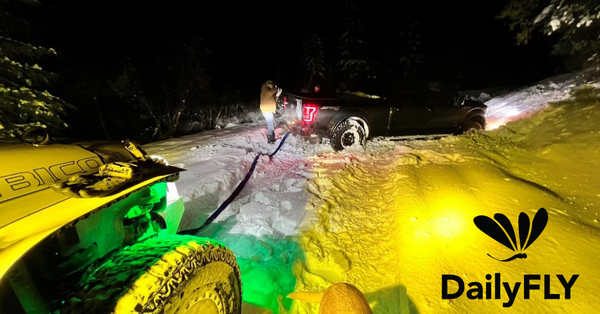 Idaho County – On November 12, 2022, around 5:40 PM, Idaho County Dispatch received a call from a stranded motorist. They were stuck in the snow in a ditch. The caller was unsure of her location, but was able to get Dispatch her coordinates, which Dispatch determined was about ½ a mile from the Canyon Junction on the 500 Road. The male party had started walking towards the Eldorado Creek Bridge about two hours before she called, but he had not yet returned.

Due to the extreme weather conditions and the amount of time that had passed since the male party had left the vehicle, Britzen McGuinness and Monty Ellis were contacted by Sheriff Doug Ulmer, as they live close to the area. They were able to quickly respond with their Jeep and were able to locate the Ford F150 pickup. The male party had just returned after being out in the cold for four hours. Monty, who is also an EMT, was able to assess his condition. He was not injured, but was cold, tired, and dehydrated, so they put him in the warm cab and got him to drink water. They were then able to pull the pickup back onto the roadway.

Sheriff Ulmer wishes to thank both Monty and Britzen for their quick assistance and using their skills in hazardous conditions to help their fellow Idaho County citizens to safety. We are fortunate to live in a community with such outstanding community members.