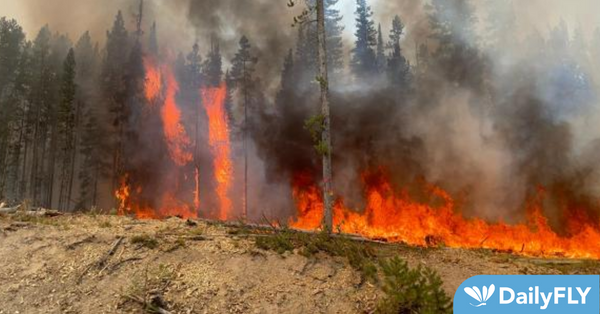 An infrared (IR) flight overnight shows an increase of 15,136 acres over the last two days with now 35% containment.  The infrared map indicates that the fire impinged upon the very north end of the watershed of the City of Salmon, just north of Jesse.

Evacuations were ordered last night for areas a few miles north of Salmon, Idaho as the Moose Fire crossed the Ridge Road and moved downhill toward the town of Salmon after 9 pm.  A dry cold front moved over the fire yesterday afternoon, producing 40 mph winds and extreme fire behavior until the early morning hours.  The eastern fire edge is now within three miles of Hwy 93 at Stormy Peak Road.

Ground forces and aerial resources engaged the fire yesterday until trigger points were reached, forcing them to retreat to safety zones.  Firefighters also plumbed and activated sprinklers in Leesburg, the Leesburg Cemetery, along the Ridge Road, on Moose Creek Road near Daly Creek, and along 1.5 miles of log decks on Moose Creek / Stormy Peak Road, to protect values at risk before pulling off the fireline. Crews were pulled from Williams Spike late last night and were in place to protect structures in the Diamond and Stormy areas through the night. Today, resources will focus on structure protection in the foothills near Diamond and in the Moose Creek area.

Another strike team of engines has been ordered.  Aerial resources will be up to assess conditions in the Leesburg area and across the fire.

WEATHER and FIRE BEHAVIOR:
A Red Flag Warning is in place from 12:00  – 9:00 pm today as a cold front and dry air are expected to arrive on gusty northwest winds in the early afternoon. Explosive fire behavior is possible, with very rapid rates of spread and long-range spotting. More seasonable temperatures are expected by the weekend.

EVACUATIONS: The Beartrack Mine and Leesburg area were evacuated on September 6th.  As of last night, Zones 1 and 11 are in ‘GO” status. 12, and 13 are in “SET” status, as determined by the Lemhi County Sheriff’s Office. Details at: https://bit.ly/LemhiCountyEvacs