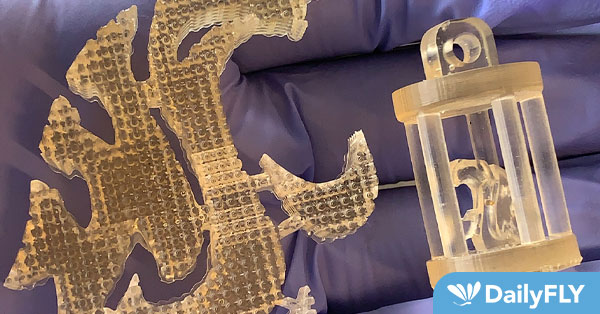 PULLMAN, Wash. — A method to convert commonly thrown-away plastic to a resin used in 3D printing could allow for making better use of plastic waste.

A team of Washington State University researchers developed a simple and efficient way to convert polylactic acid (PLA), a bio-based plastic used in products such as filament, plastic silverware, and food packaging to a high-quality resin.

“We found a way to immediately turn this into something that’s stronger and better, and we hope that will provide people the incentive to upcycle this stuff instead of just toss it away,” said Yu-Chung Chang, a postdoctoral researcher in the WSU School of Mechanical and Materials Engineering and a co-corresponding author on the work.  “We made stronger materials just straight out of trash. We believe this could be a great opportunity.”

About 300,000 tons of PLA are produced annually, and its use is increasing dramatically.

Although it’s bio-based, PLA, which is categorized as a number seven plastic, doesn’t break down easily. It can float in fresh or salt water for a year without degrading. It is also rarely recycled because like many plastics when it’s melted down and re-formed, it doesn’t perform as well as the original version and becomes less valuable.

“It’s biodegradable and compostable, but once you look into it, it turns out that it can take up to 100 years for it to decompose in a landfill,” Chang said. “In reality, it still creates a lot of pollution. We want to make sure that when we do start producing PLA on the million-tons scale, we will know how to deal with it.”

In their study, published in the journal, Green Chemistry, the researchers, led by Professor Jinwen Zhang in the School of Mechanical and Materials Engineering, developed a fast and catalyst-free method to recycle the PLA, breaking the long chain of molecules down into simple monomers – the building blocks for many plastics. The entire chemical process can be done at mild temperatures in about two days. The chemical they used to break down the PLA, aminoethanol, is also inexpensive.

“If you want to rebuild a Lego castle into a car, you have to break it down brick by brick,” Chang said. “That’s what we did. The aminoethanol precision cut the PLA back to a monomer, and once it’s back to a monomer, the sky’s the limit because you can re-polymerize it into something stronger.”

Once the PLA was broken down to its basic building blocks, the researchers rebuilt the plastic and created a type of photo-curable liquid resin that is commonly used as printing “ink” for 3D printers. When it was used in a 3D printer and cured into plastic pieces, the product showed equal or better mechanical and thermal properties than commercially available resins.

While the researchers focused on PLA for the study, they hope to apply the work to polyethylene terephthalate (PET), which is more common than PLA, has a similar chemical structure, and presents a bigger waste problem.

They have filed a provisional patent and are working to further optimize the process. The researchers are also looking into other applications for the upcycling method.