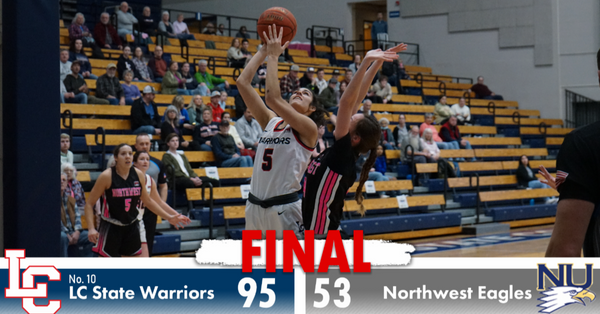 LEWISTON – Victory number 18 started slow, but the No. 10 LC State Warriors picked up the pace in the second quarter to secure the 95-53 win over Northwest University on Saturday.

Callie Stevens continued her hot streak with her fourth straight 20-point game and Sitara Byrd notched her first double-double with 11 points and 10 rebounds.

“Give credit to Northwest, they came out red hot and executed their offense extremely well in the first half,” Head Coach Brian Orr said. “It wasn’t like we were struggling, our offense was effective all game. We adjusted our defense in the second half and were able to get several steals which got our transition game going.”

The Warrior and Eagles played a close first quarter with the score tied 16-16 midway through the period. Callie Stevens, Maddie Holm and Ellie Sander tallied the first LC State baskets to give the Warrior women a 6-5 edge in the first two minutes. The teams traded baskets until a layup by Sitara Byrd put the Warriors in front 16-13 at 4:57.

Free throws and a layup by Payton Hymas kept things knotted 22-22 at the end of the first 10 minutes.

Lindsey Wilson got the Warriors off to a strong start in the second frame with an and-one play. A jumper by Hannah Broyles capped the five-point run with LC ahead 27-22 at 8:57. Buckets by Wilson and Sander kept the Warrior women in front by a slim margin, but Northwest kept the pressure up and the score within a possession with five minutes to play in the half.

Sara Muehlhausen handed an offensive rebound over to Byrd for a layup to push the difference to 35-32 at 3:42 before Stevens drained a pair of triples to extend the advantage. The junior added her third bucket in a two-minute span to make it 43-36 LC State in the final minute.

Muehlhausen and Hymas both made their way to the basket as the clocked ticked down to give the Warriors a 48-39 lead at the break.

LC State opened the third quarter on an 8-0 run with buckets by Muehlhausen, Sander and Holm to give the Warriors a 56-39 cushion by 7:10. Stevens and Byrd tallied back-to-back buckets to keep LC on control with a 61-44 lead two minutes later.

LC went on a 12-point run, including back-to-back buckets by Byrd and 3s by Hymas and Broyles, to put the Warriors ahead 69-44 at the 2:40 mark. Hymas drained another 3 after a Northwest free throw to secure the 72-47 lead at the end of the third quarter.

Ella Nelson tallied the first points of the fourth frame with a pair of foul shots. Broyles kept the rally going with a layup on a rebound and assist from Sander, and a triple by Stevens made it seven Warrior points in a row at 79-47.

The Warriors added on with a 13-point rally that was capped by buckets by Adyson Clabby, Sitara Byrd and Ella Nelson. The run stretched the LC State advantage to 92-49 with 90 seconds to play.

Stevens led all scorers with 21 points in the contest, and Broyles dealt a career-best eight assists. Byrd had her first double-double with a career-high 11 points with 10 rebounds, and Muehlhausen also tallied 11 points. Sander and Byrd each had three steals.

“We got great production off the bench tonight, and back-to-back games with single-digit turnovers and a season-high 24 assists says a lot about our execution and decision making,” Orr added. “It was definitely a fun one to win.”