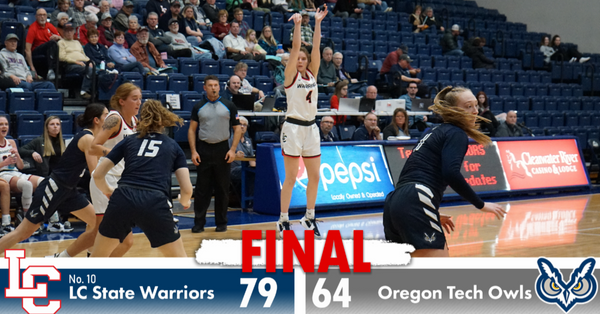 LEWISTON – The No. 10 Warrior women made it rain from 3-point range with 13 triples in Friday’s victory over Oregon Tech. LC State Women’s Basketball, led by five 3s each from Callie Stevens and Hannah Broyles, defeated the Owls 79-64 to stay perfect in Cascade Conference play.

“We got out to a great start behind Callie and Hannah’s scoring,” Head Coach Brian Orr said. “But OIT started fast as well. We did a pretty good job of attacking the basket and finding the open player. OIT did a decent job attacking our zone, especially in the first half, but we did a better job defending in the second.”

Stevens started the scoring with a 3 on LC’s first possession. She added another, plus a free throw, to give the Warriors a 7-2 lead a minute in. Broyles and Stevens each drained a triple to fight off an OIT advance and keep LC in front 13-9 by 6:57. Broyles hit the fifth 3-pointer of the quarter at 5:59 to break a 13-13 tie.

Ellie Sander fought her way to a pair of baskets to keep the momentum going for the Warriors. Sitara Byrd took a steal all the way back to the basket to close out the first 10 minutes with LC leading 24-18.

Broyles put the Warriors on the board in the second frame with a 3, but seven straight points by OIT put the Owls in front 29-27. Sara Muehlhausen stepped up with a block and four points to give the Warriors a 31-29 advantage at 3:48, and 3s by Stevens and Broyles ended the half with LC State in front 44-35.

The duo of Broyles and Stevens continued the barrage of 3-pointers in the third quarter to push the lead to double-digits, 50-38. Sander added five points in a row before Payton Hymas hit a 3 to cap an eight-point run with LC ahead 58-43 at 4:56.

Hymas, Broyles, Stevens and Byrd combined for a 9-2 run to close out the third frame with a 67-49 advantage.

The Warriors cruised through the final 10 minutes to earn the 79-64 victory.

Stevens and Broyles both tied their career-highs with five 3-pointers in the contest. Stevens led the game with 20 points on a 6-for-12 shooting night, 5-for-9 from 3. Broyles added 19 points with seven field goals. Sander shipped in 16 points.

“We did some really good things tonight,” Orr added. “One of our goals was to get a high percentage shot every possession, and I thought we did a good job executing our game plan. And we beat a good team tonight.”

As a team the Warriors shot .455 from the floor.

OIT was led by Maddyson Tull’s 20 points with a 9-for-18 night from the floor. She notched a double-double with 12 rebounds, and Olivia Sprague scored 15 points.

The Warrior women host No. 23 Southern Oregon on Saturday at 4 p.m. in the P1FCU Activity Center in a rematch of last season’s Cascade Conference title game.