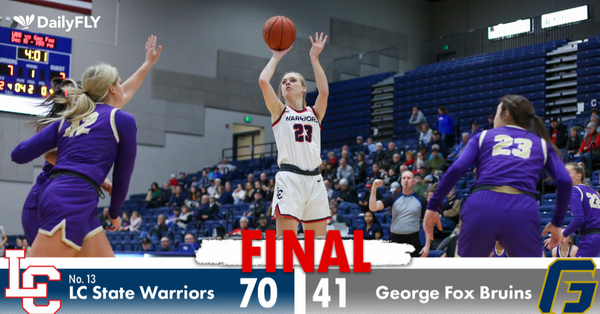 LEWISTON – The No. 13 LC State Women’s Basketball team wrapped up the homestand with a 70-41 victory over NCAA Division III George Fox on Saturday. Every Warrior scored in the contest to close out non-conference play.

With the victory, LC State holds a record of 8-1 heading into the main conference slate.

“Coming off of a big game yesterday, we stressed to the girls the importance of not having any letdowns this afternoon and I think they responded well to that,” Associate Head Coach Caelyn Orlandi said. “We defended and rebounded exceptionally well and it was a great team win. We had so many players make an impact in the game, and I thought our freshmen had great minutes and played with confidence. Ellie Sander had a great weekend and Hannah Broyles shot the ball and defended incredibly well. It was a great weekend of Warrior basketball and I love how hard this team works every time they step on the floor.”

Callie Stevens opened the contest with five straight points to put the Warriors up early, and seven straight points by Ellie Sander made it a 12-4 LC State lead by 4:01. Hannah Broyles capped a 12-0 run with a 3-pointer to push the advantage to 17-4, and Stevens closed out LC’s scoring in the first with a 19-8 lead.

Sitara Byrd scored on a pair of jump shots before Stevens added back-to-back buckets for a 27-10 lead at 7:17. Maddie Holm, Mataya Green, Adyson Clabby and Broyles combined for a run of seven to send the Warriors into the break with a 39-21 cushion.

The Warriors were held off the board in the third quarter until Lindsey Wilson scored on an assist from Payton Hymas at 7:30. Broyles tallied two more 3s plus a layup to help LC on a 11-3 stretch for a 50-27 lead by 5:27. Another 3 by Boyles, a free throw by Byrd and bucket by Sara Muehlhausen put the Warriors up 56-34 heading into the final frame.

LC State ended the contest with an eight-point run with tallies from Sander, Hymas and Green en route to the 70-41 victory.

Broyles led all scorers with 16 points and Stevens added 14. Both snatched three steals. Sander finished the game with 11 points and seven boards, and Byrd led the defense with nine rebounds.

The Warriors forced 28 turnovers and committed only 12. LC had 14 steals compared to the Bruins’ 5.