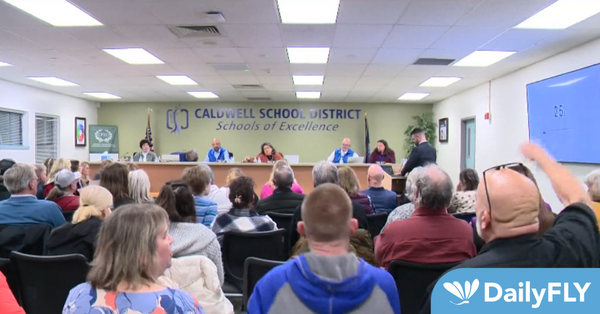 Originally posted on IdahoEdNews.org on January 10, 2023

CALDWELL –  An unruly audience volleyed insults and threats at the Caldwell School Board Monday night, forcing trustees to call the meeting to an early end.

At the heart of the fracas was a draft of a potential policy that would establish rights and protections for all students, regardless of sexual orientation.

More than 90 students, Caldwell residents, and others filled the meeting room. Patrons also stood outside the room, which was at capacity.

The chaos began when Sen. Chris Trakel, R-Caldwell, was speaking against the policy.

Trakel said that the board members would be putting all students’ “moral health and safety at risk” by allowing students to use locker rooms that align with their gender identity.

“And like I told you before, you will face litigation,” he said. “You call that a threat, I’m telling you that is what will happen. It’s already happened in several states, and there’s already been rulings on it.”

Trakel went on to say that the board should throw out the policy and “not even consider it.” While he was speaking, Board Chair Marisela Pesina turned to briefly speak to another board member, and Trakel chastised her to listen. She gave him her attention, and he began raising his voice and accusing the board of breaking rules.

Pesina called for a 15-minute recess at that point, which caused chaos, yelling, and calls from the audience for the board members to be recalled. The meeting was then adjourned.

Travis Manning, the board’s vice chair, blamed Trakel for the disorder in a Tweet on Tuesday.

“Last night’s Caldwell School Board chaos was orchestrated by Idaho Sen Chris Trakel, who doesn’t believe ID boards have the legal right to run their own mtngs or set policy,” he tweeted.

Jessica Watts, the communications director for the Caldwell School District, wrote in an email to EdNews that the “meeting ended unexpectedly after some members in attendance repeatedly disrupted the meeting refusing to follow rules for public participation.”

“It was disappointing that some attending refused to follow the rules, which prevented others from sharing their thoughts with the Board,” she wrote. “Caldwell School District welcomes and encourages feedback on its work. What we do not welcome are those who refuse to follow the steps necessary for a civil, courteous, and respectful environment for that feedback to occur.”

Watts also pointed out that audience members had been warned multiple times to check their behavior before the meeting was ultimately adjourned.

The contentious ending came after about 13 Caldwell residents, including four students, spoke on the policy. Four speakers were in favor (three of those were students) the rest were opposed.

The policy was one of 22 presented at the meeting for informational purposes. Those policies, including the one on sexual orientation, are provided in draft form so the public can consider them and provide input. Then, each policy may or may not move on to a first and second reading, at which point board members would vote on whether to officially adopt it.

“Dialogue in a democratic republic like ours requires courteous listening, research-based decision making, and respectful conversation,” he said.

“Imagine you are a young female, shy and feeling awkward about your growing body … and your school has allowed a biological male to undress in the same locker room as you, exposing all his parts to you,” Brittany Gish said. “How incredibly uncomfortable.”

Brian Festa, a Cadwell attorney, said that if his son (a student in the district) saw teachers using students’ preferred names and pronouns, it would equate to being taught “a religious belief that is in opposition to my own beliefs.”

Three Caldwell School District students spoke up on behalf of the policy.

“We should be fighting for the rights of all people, even people that are different from yourself,” Nicholas Mendez, one of the students, said. “Allowing LGBTQ+ students to use a bathroom that fits with their gender, be treated how they want to be treated, and be shown basic respect, is not something I should be standing here fighting for. That should be something that is already established.”

It will now be up to the board to determine how to move forward.

“We will be working with the Board Chair and Trustees to identify the next steps in gathering feedback from the community on this policy,” Watts said.

The meeting can be watched in full here.