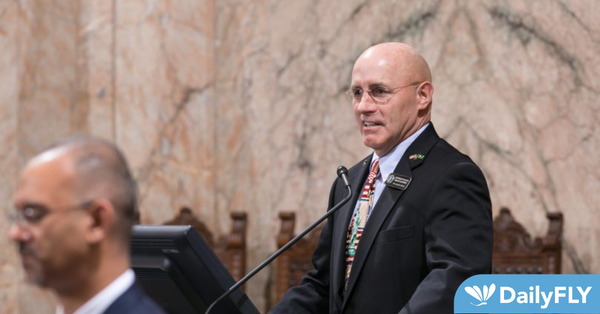 (The Center Square) – Washington state voters won’t see Rep. Brad Klippert’s name on the ballot for secretary of state during this year’s general election, but he is a candidate for the job.

That’s because Klippert, a Republican from Kennewick, is running a write-in campaign challenging appointed Secretary of State Steve Hobbs, a Democrat, and Pierce County Auditor Julie Anderson, running as a nonpartisan, for secretary of state.

Klippert says he was asked to run by a group of Republicans following the Aug. 2 primary election that saw the GOP shutout for the general election after three Republican candidates – Bob Hagglund, state Sen. Keith Wagoner of Sedro Woolley, and former state Sen. Mark Miloscia of Federal Way – split up a combined 39% of the primary vote.

“It was not my idea,” he said of his write-in campaign. “Never could I imagine that I’d be doing any of this.”

Nevertheless, Klippert is all in.

“People in Washington state are entitled to have a conservative Republican candidate on the ballot,” the lawmaker and Benton Count sheriff’s deputy said.

Klippert is not impressed by the two secretary of state candidates on the ballot by virtue of their being the top two finishers in the primary election. Hobbs won that contest with about 40% of the vote. Anderson received about 13%, barely edging out two Republicans by less than a percentage point.

“Right now, we do not have a secure election process,” he asserted. “Nor is it transparent.”

According to Klippert, Hobbs’ office has made the election process less transparent, citing its support of amendments made to the Washington Administrative Code this year, including mandating the destruction of election records “no later than 10 days following county certification” as part of a risk-limiting audit.

Hobbs, a Democrat, was appointed secretary of state last year by Gov. Jay Inslee after Republican three-term Secretary of State Kim Wyman stepped down to take an election security position in the Biden administration.

Klippert’s main criticism of Anderson is what he calls her support for the gradual adoption of ranked choice voting, a system that allows voters to rank multiple candidates on a ballot in order of preference.

He called ranked choice voting a “complicated” and “hard to understand” process that muddles election results.

“I am absolutely, positively, totally opposed to ranked choice voting,” Klippert said. Klippert’s own plans, should he become secretary of state, include pushing the scrubbing of all voter rolls and re-verifying all registered voters, requiring an official government-issued photo identification to register and vote, and outlawing voting by mail.

“You’re going back to the polls,” he said.

Klippert is confident he can prevail as a write-in candidate.

Citing his 14 years as a legislator, representing the state at voter integrity conferences, and his multi-year study of state election laws, Klippert called his chances of becoming the next secretary of state “extremely good.”

He is backed up by the state Republican Party.

“The Washington State Republican Party proudly endorsed Representative Brad Klippert as a write-in candidate for Secretary of State,” Washington GOP Chair Caleb Heimlich said in a press release. “Representative Klippert has a strong record of serving and fighting for the people of Washington. The voters of our state have repeatedly elected a Republican to this office and they deserve to have the option of keeping this statewide position Republican. Writing in Representative Klippert is a great choice for voters who want clean, free, and fair elections.”

New polling released Friday morning appears to show Klippert having an impact on the race.

A Northwest Progressive Institute poll indicated a close race between Hobbs and Anderson until voters learn about the Republican write-in candidate.

According to the poll, in a head-to-head matchup, 34% of respondents preferred Anderson, 33% went with Hobbs, and 32% said they were unsure.

The general election is Nov. 8. Whoever wins the election for secretary of state will fill out the last two years of Wyman’s term.

Hobbs has been offered the right of rebuttal in the form of his own feature story.