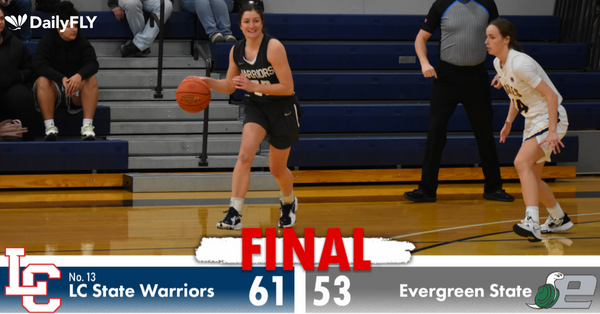 OLYMPIA, Wash. – Ellie Sander picked the perfect night to notch the first double-double of her career. The sophomore tallied 10 points and a career-high 10 rebounds to help No. 13 LC State Women’s Basketball to a 61-53 victory after a back-and-forth with Evergreen State on Saturday.

With the win the Warriors improve to 6-1 overall and 3-0 in Cascade Conference play.

“We certainly didn’t look like the same team tonight as we did last night,” Head Coach Brian Orr said. “We learned a lot about preparing for the second game on a short turnaround, but you have to give Evergreen a ton of credit. They really played hard and kept it tight all game. I am really happy with the way we were able to find a way to win. That’s always the mark of a good team.”

Evergreen grabbed an early 5-2 lead before a block and rebound by Sara Muehlhasusen led to a game-tying 3-pointer by Callie Stevens. Muehlhausen hit back-to-back buckets to put the Warriors up 9-5 at 5:56, and three free throws by Stevens made it a 12-7 advantage midway through the quarter.

Sitara Byrd helped LC keep its slim margin with a jumper to push the lead to 14-10 at 3:18. Hannah Broyles capped the six-point run with a pair of foul shots as the Warriors closed out the first frame with a 16-13 advantage.

Lindsey Wilson opened the scoring in the second quarter on an assist from Payton Hymas, but the Geoducks picked up speed to jump in front 19-18 by 7:39. The two squads traded baskets with the lead changing hands before a and-one play by Sander at 4:27 put the Warriors back in front. A basket by Broyles made it a five-point stretch to bring the score to 29-24.

The Warriors struck for back-to-back buckets by Muehlhausen and Byrd to give LC a 33-26 edge with 1:19 to play in the half. Stevens converted on a pair of free throws in the final minute, and Byrd added her third basket to send the Warrior women into halftime with a 37-27 lead.

Evergreen came out of the break with the eight straight points to cut the margin to 37-35 by 6:43. Sander put the Warriors on the board for the first time in the frame with a free throw at 5:52, but the Geoducks stayed hot and evened the score 39-39 at 5:07.

Free throws gave TESC a three-point advantage a minute later. Stevens hit back-to-back buckets to give LC the lead, 43-42, at 3:05. Broyles added to the lead with a triple at 1:12 before Stevens tallied LC’s second straight 3-pointer 30 seconds later to extend the 10-point swing. The Warriors led 49-42 heading into the final 10 minutes.

Sander kept the momentum going with a jumper to start the fourth quarter and cap the 12-point run. Sander and Muehlhausen scored a pair for LC to grow the lead to 55-44 by 7:02.

Muehlhausen, Wilson, Sander and Broyles added to the Warrior total in the final two minutes to finish off the Geoducks by a final of 61-53.

Stevens led the game with 17 points and Muehlhausen dropped 16 with nine boards. Sander’s first double-double featured 10 points and 10 rebounds, and Broyles collected a career-best eight rebounds to go with her nine points.