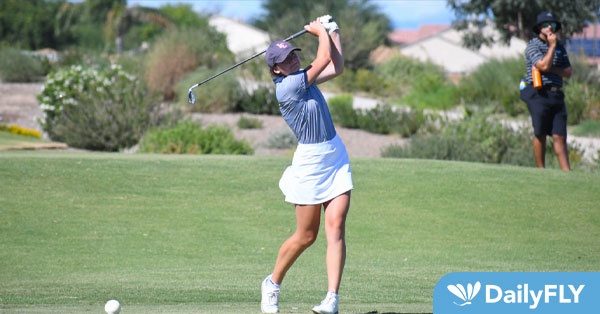 SURPRISE, Ariz. – Alexandra Schmidt put together three strong rounds of golf to tie for fifth at the Ottawa Fall Invitational, hosted by Ottawa (Ariz.) at Sterling Grove Golf and Country Club. The three-round tournament wrapped up on Tuesday after a dust storm suspended the second round on Monday.

Schmidt, a senior, led the Warrior women to a fourth-place finish at 936 (10-over), just one stroke behind Hope International (Calif.). Host No. 14 Ottawa (Ariz.) won the team title with 901 strokes, and No. 12 Milligan (Tenn.) was 20 strokes behind in second. The Regina, Saskatchewan, native carded three birdies during the round. She had two on the back nine and finished her final 18 holes 2-over, tying LC’s low for the tournament. She started and ended her day with a birdie.

“Alex led the girls and played some solid golf,” Head Coach Zach Anderson said. “I am excited to see what she can do to finish out her LC career in the spring.”

Kyla Currie wrapped up her second round with a team-best tying 74, but faltered in the final 18 shooting an 82. Her strong start to the tournament gave her enough cushion to finish in the top 15 at 18-over. Kylle Hughes and Deana Caurso tied for 20th with matching 238s (22-over), and Dallis Shockey was 28th at 32-over.

“The girls came into the third round less than 10 shots back, so it was good to see them in contention,” Anderson explained. “In the end, the nationally ranked teams came out a bit better, but the girls are close to proving that they are top-25 material.”

On the men’s side, Jorgen Lie Viken wrapped up his fall with a top-10 finish in a tie for seventh. He wrapped up his second round with a 1-under 71, then matched par in the final round to finish 1-under for the tournament. He fired off four birdies in the final round. Devon Caruso capped his fall in a tie for 17th with a 2-over final round, and Sondre Andresen placed 25th at 12-over for the tournament.

The tournament also marked the end of the career of Carlos Davila, a fifth-year senior graduating in the winter. He wraps up his time as a Warrior with multiple all-conference selection and was named the Frontier Conference Freshman of the Year in 2019.

“Carlos didn’t have his best stuff this fall, but he has had a heck of a career,” Anderson said. “I haven’t been able to coach him long, but I am super proud of him. He has a bright future and I am excited to see him accomplish so much going forward.”

The No. 15 Warrior men finished fifth overall at 36-over, 25 strokes behind Arizona Christian. No. 4 Ottawa (Ariz.) won the team title at 16-under, while the host’s B squad was second at 7-under. NCAA Division III No. 7 Claremont-Mudd-Scripps was third at 8-over.

“A few of the guys found a way to settle in,” Anderson said. “Jorgen had a consistent three rounds, Devon battled and, other than a couple holes, had a decent tournament. If we are wanting to compete with some of the national contenders we are going to have to execute better.”

Full results and statistics can be found at the links above.