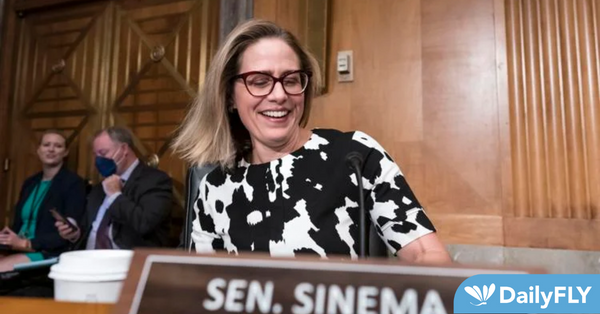 (Casey Harper, The Center Square) – Arizona U.S. Sen. Kyrsten Sinema’s announcement that she is leaving the Democratic party to be an Independent sparked a flurry of speculation Friday about what this could mean for the Democrats’ Senate majority and the future of the party itself.

After U.S. Sen. Raphael Warnock of Georgia bested Herschel Walker earlier this week, Democrats were left with a 51-49 seat majority in the Senate, when including independents who caucus with the major political parties. That gave them breathing room after navigating a narrow 50-50 split with Democratic Vice President Kamala Harris’ tie-breaking vote during the first two years of Biden’s administration.

Many speculated that Sinema’s departure could pave the way for U.S. Sen. Joe Manchin, D-W.V., to leave the party as well. Manchin and Sinema have been among the most centrist Democrats, often halting, slowing or modifying the Biden agenda in the past two years.

“Joe Manchin is next, except he should go the whole hog and become a Republican,” conservative filmmaker Dinesh D’Souza said after Sinema’s announcement.

As Biden pushed his agenda since taking office, Manchin has cited concerns over energy costs as well as worries about inflation and elevated federal spending, often Republican messaging points. Manchin’s resistance forced Democratic leadership to meet with and cater to him, though they were still able to pass trillions of dollars in new federal spending.

Warnock’s victory this week gave Senate Democrats hope they may be free from that kind of catering, but Sinema’s decision may nix those hopes.

At the same time, the Republican majority in the House could make the discussion moot unless Democrats are able to sway some House Republicans for their agenda.

Critics said Sinema’s decision was self-serving and intended to avoid a difficult Democratic primary because of her moderate stances.

“Rather than risking a primary defeat, she’s created a scenario where if Democrats run a candidate in the 2024 general they risk throwing the race to the likes of Kari Lake,” Matthew Gertz of Media Matters said.

Sinema explained her decision in an op-ed with the Arizona Republic.

“There’s a disconnect between what everyday Americans want and deserve from our politics, and what political parties are offering,” she wrote. “Becoming an Independent won’t change my work in the Senate; my service to Arizona remains the same.”

Sinema blasted Washington, D.C., partisanship, saying it makes it difficult to get anything done.

“Arizonans expect our leaders to follow that example – set aside political games, work together, make progress and then get out of the way so we can build better lives for ourselves and our families,” she wrote. “It’s no surprise that Washington, D.C., often fails to reflect that expectation. Everyday Americans are increasingly left behind by national parties’ rigid partisanship, which has hardened in recent years. Pressures in both parties pull leaders to the edges, allowing the loudest, most extreme voices to determine their respective parties’ priorities and expecting the rest of us to fall in line.”

“Through several pieces of historic legislation and Senator Sinema’s help, Democrats have made huge headway on delivering that for Arizonans,” Arizona Democratic Party Chair Terán said. “However, Arizonans also need their voting rights protected and corporations to pay their fair share. Unfortunately in those areas, Senator Sinema has fallen dramatically short leaving Arizonans behind. As a party, we welcome Independent voters and their perspectives. Senator Sinema may now be registered as an Independent, but she has shown she answers to corporations and billionaires, not Arizonans. Senator Sinema’s party registration means nothing if she continues to not listen to her constituents.”