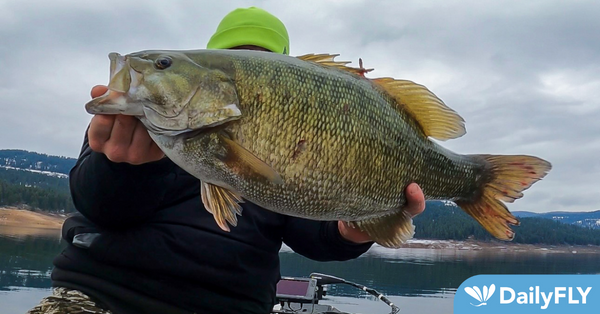 OROFINO – It was a typical cold, December day in central Idaho with rain down low and snow in the mountains. While many anglers might have been thinking about ice-fishing, winter steelhead, or even putting a fresh coat of wax on their skis and hitting the slopes, Joey Walton had other plans: big Smallmouth bass. Knowing he had to make the long run across the reservoir, he set out early in search of a trophy.

Having been looking for a record fish for months, and already catching several smallmouths this season just shy of the current record, he knew he was in for a challenge. On that cold 13th day of December, his hard work finally paid off when Walton finally connected with the fish he had been looking for. After using a measuring board to verify an accurate length and getting a some quick photos, Joey released the 23.75-inch giant smallmouth back into the frigid waters of Dworshak Reservoir, and took home a new catch-and-release state record instead.

This year (2022) may be remembered as of the best for Dworshak Reservoir, having produced a string of impressive smallmouth bass. This previous article describes how bass growth can explode in years of abundant food. If conditions remain consistent, there could be another record coming. But don’t get your hopes up, as the 9.72-pound weight record (also 23.75″ long) of Dan Steigers from 2006, and this latest catch-and-release record will require a truly exceptional fish to be broken Still, I’m optimistic and looking forward to seeing what 2023 might bring to the record books.