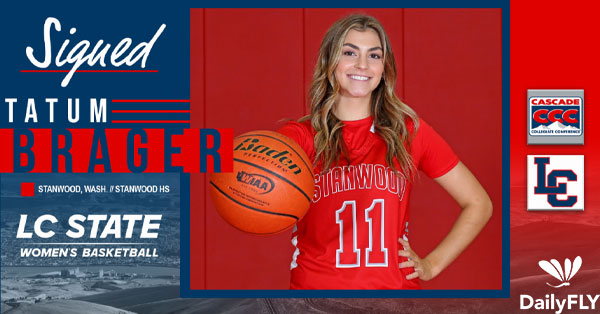 A standout at Stanwood High School in Stanwood, Wash., Brager has hit 44 percent of her 3-point shots and is averaging 8.3 points per game. The guard averages 3.3 assists, 4.3 rebounds and 1.5 steals per game.

“We are extremely excited to be adding Tatum to next year’s roster,” Orr said. “She is definitely the real deal. When Tatum played with our team on her campus visit, she was so good that I honestly thought she could be competing for a starting spot on this year’s team. An excellent athlete, Tatum’s speed and quickness fits well into our play-faster system. Offensively, she is an outstanding ball handler who sees the floor and makes good decisions.

“A triple threat scorer, she can extend defenses with her deep range and lightning quick release,” Orr said. “She also has the ability to get to the rim and finish, or get to the free throw line. It’s always exciting when we are able to add a highly skilled player with a high basketball IQ, and Tatum has the unique ability to make everyone around her better. The day she signed, our team got better.”

Brager was recently listed as one of the top 3A players in the state of Washington was named a Player to Watch by Prep Girls Hoops. She is an all-conference performer in both basketball and track and field and helped the girls’ basketball team place sixth at State. Brager is an AP student and was named an Outstanding Scholastic Award recipient.