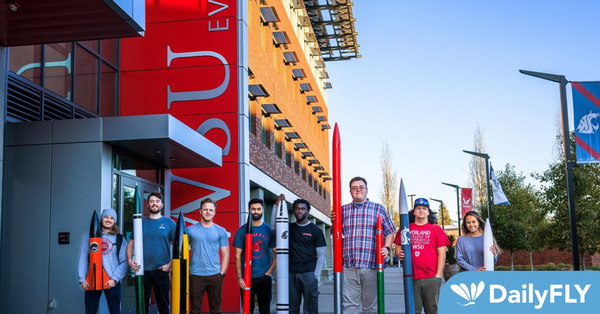 This is the first-time students from WSU will compete in the NASA Student Launch, in which middle, high school, and college teams from across the nation design, build, and fly an amateur rocket to an altitude between 4,000 and 6,000 feet.

WSU Everett and Central Washington University are the only schools in Washington state selected to compete.

“We have come a long way,” said Brendon Rosenkranz, leader of the rocket team, which began work on a prototype last fall without any prior rocketry experience.

The nine-month-long challenge will culminate with an on-site launch event near NASA’s Marshall Space Flight Center in Huntsville, Alabama, April 13-15, 2023. The 51 teams participating in the competition will be judged on their ability to design a payload capable of autonomously receiving commands via radio frequency and fulfilling specific tasks with an onboard camera. The payload requirements are changed every year to mirror the technological needs of NASA’s existing missions, according to NASA’s news release.

WSU’s selection to compete in the NASA Student Launch competition comes 6 years after another team of student engineers from Everett took second place in NASA’s University Rover Challenge, where participants from around the world design and build rovers meant to explore Mars.

Participation in the NASA Student Launch competition also coincides with the 10th anniversary of the WSU engineering program in North Puget Sound.

“Whether or not we win the competition, to have a small, four-story school constantly compete nationally, it tells future students that you can go here and make a difference,” Rosenkranz said.

In addition to rocket designing and building, students must declare a targeted altitude for their rocket on final launch day, maintain social media presence with the device, and conduct community outreach to inform local communities about spaceflight technology. The WSU Everett team is planning to engage with 250 students from Everett High School and Arlington High School through on-site educational fairs.

The team will fly to NASA’s Marshall Space Flight Center in Huntsville, Alabama the week of April 15, 2023, to participate in the final launch event.

The WSU team members, most of whom are non-traditional students in their late 20s, recently achieved their fundraising efforts to cover the expenses of traveling and equipment shipping to NASA’s Marshall Space Flight Center for the final launch event next year. They are still accepting donations through the WSU Foundation for extra funds that will allow them to acquire higher quality materials.

As transfer students, most of whom are in their late 20s, married or have children, members of the rocket team said they have sacrificed much of their personal lives for this year-long project, not only as the next step in education but also as a commitment to what they are inspired to become.

“It’s hard to be away from my wife and 21-month-old daughter for the entire weekend to go on launches,” said 28-year-old team member Muhammad Samateh. “But they have been my greatest support so that I can pursue my dream.”

The rocket team had their first launch of the academic year in Walla Walla the weekend of Nov. 19.

Article in the WSU Insider