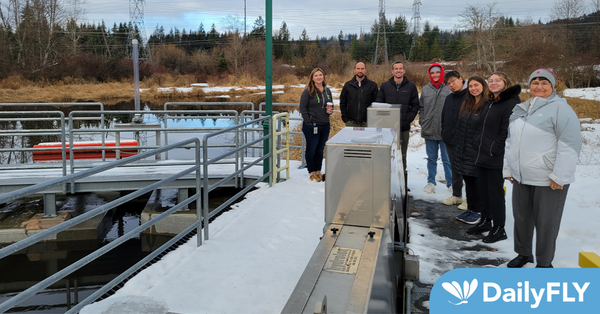 A team of Washington State University Pullman senior electrical engineering students is bringing classroom learning to life through the design of a microgrid for an administration building on the Tulalip Indian Reservation.

The year-long project is a collaboration with the Snohomish Public Utility District (PUD) and the Tulalip Tribe, a sovereign nation that is working to reach energy independence. The senior design team was supported as part of WSU’s activities for the US Department of Energy US-India CollAborative For Smart DiStribution System WIth Storage (UI-ASSIST).  Senior design team members included Isobel Baetz, Aidan Smit, Sheng Qu, Brenden Rappazzo, and Charlotte Wertz.

Operating independently or in conjunction with a main power grid, a microgrid provides occupants of a building with power even during a main grid outage. Microgrids are powered by an independent energy collection system. The team’s design uses solar power collected through panels on the building rooftop and on a proposed covered parking lot. Energy derived from the sun will be stored in a battery storage system which, when activated, would power the building via a shared circuit.

Without carbon emissions, a solar-powered and storage system yields more sustainable power than that of a diesel generator and costs less to the occupant, the team says.

“We wanted to minimize the levelized cost of energy, which is how much they’re paying per kilowatt hour,” Baetz said.

The team used energy resource optimization software to establish a layout of the microgrid and its components, resulting in an economically efficient framework.

Under mentorship from Noel Schulz, Edmund O. Schweitzer III Chair in Power Apparatus and Systems in the School of Electrical Engineering and Computer Science, and Sanjeev Pannala, research assistant professor, the team curated relationships with the Tribe and Snohomish PUD during April and December visits to Tulalip, Washington.  Schulz also holds a joint appointment with Pacific Northwest National Laboratory.

Energy sovereignty, sustainability, resilience, and education were among the goals outlined by the Tribe and team in designing the microgrid.

The administration building’s energy resilience would be increased with the microgrid, providing hours of stored solar power during an outage. This would allow the tribe’s government to continue operations and provide space for necessary medical equipment to remain active. The microgrid also provides the first steps towards energy sovereignty, a larger goal of the tribe, and would provide a chance to teach younger generations about clean, renewable energy.

“We want the microgrid to be a method that the Tribe can use to teach their youth about clean energy and interest them in pursuing that career path and to help them with their ultimate goal of reaching energy sovereignty in the future,” Baetz said.

In October, three of the team members travelled to Salt Lake City to present their techno-economic analysis of the project at the North American Power Symposium. Nearly 150 energy-forward projects were presented at the symposium.

“It was a great opportunity to share the ideas of tribal energy sovereignty with the academic community,” Baetz said. “We hope it will create more interest that leads to more projects like ours in the future.”

Although only a rough timeline has been established, implementation of the team’s microgrid has been planned by the Tulalip Tribe and Snohomish PUD.

“The Tribe is looking generations ahead on how they can leave a positive impact on the earth and on their community,” Wertz said. “That’s really inspiring.”