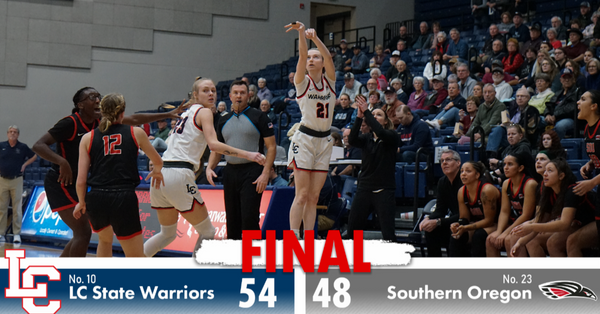 LEWISTON – The No. 10 Warrior women avenged last season’s loss to No. 23 Southern Oregon in the Cascade Conference tournament title game with a 54-48 victory on Saturday. Callie Stevens scored a team-high 20 points for the second night in a row with a 4-for-7 night from behind the 3-point line.

The Warriors rallied for 20 unanswered points in the first half to turn an 18-4 deficit into a 24-18 advantage. The LC State defense held the Raiders to just five points in the second quarter.

With the victory, LC State is 16-1 on the season and 11-0 in Cascade Conference play. The Warriors have won 16 straight contests.

Southern Oregon started the back-and-forth with a 7-0 advantage before buckets by Maddie Holm and Ellie Sander put the Warriors on the board. The Raiders added eight more to push the margin to 18-4, then LC State exploded for 20 straight points.

A 3 by Sander got the run going at 2:58, and Adyson Clabby and Stevens hit back-to-back triples. Stevens ended the first quarter with a jumper to bring LC within three, 18-15.

The rally continued with tallies from Sara Muehlhausen, Hannah Broyles and Lindsey Wilson to put the Warriors up 24-18 at the 6:14 mark. SOU cut the lead to one before a 3 by Stevens ended the half with LC leading 27-23.

The Raiders battled to take a 35-32 lead in a low-scoring third frame and pushed the difference to 41-35 with 7:34 to play in the fourth.

The Warriors finished the comeback with a final push in the final seven minutes. Sander got the offense going with a layup to spark a run of 12. Stevens added five points in the run, Sander tallied four and Muehlhausen added a free throw to give LC a 47-41 edge with 4:37 on the clock.

Back-to-back buckets by Holm and Payton Hymas pushed the advantage to eight, 51-43, in the final 90 seconds, and Stevens and Sitara Byrd closed out the scoring with the Warriors ahead 54-48.

The Warriors led the battle at the board 47-44, with the difference being three offensive rebounds.