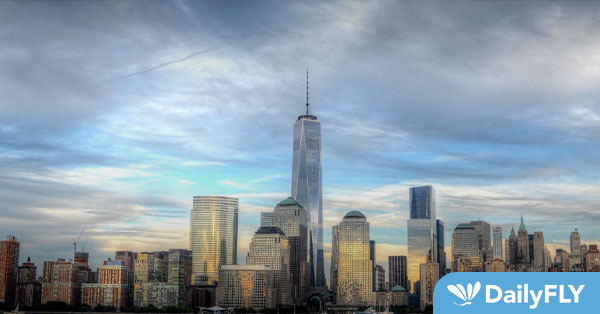 THROWBACK THURSDAY – On this day in 2014, One World Trade Center officially opens in Manhattan. The new tower, along with the rest of the World Trade Center complex, replaced the Twin Towers and surrounding complex, which were destroyed by terrorist attacks on September 11, 2001.

As the city and the nation reeled from the attacks, which set into motion the series of U.S-led military operations dubbed the War on Terror, it was decided that the Twin Towers should be replaced by new office buildings, parks, a museum, and a memorial to those who died.

In 2002, after cleanup and recovery efforts had concluded, the Lower Manhattan Development Corporation announced a competition to find the chief architect of the new structure. Daniel Libeskind, a Polish-American architect then in charge of a studio in Berlin, won and became the site’s master planner. In reality, however, a number of people and entities, including then-Governor George Pataki, leaseholder Larry Silverstein, and the Port Authority of New York and New Jersey, wrestled over what would happen to the space commonly referred to as “Ground Zero.”

The initial plans for the site were steeped in post-9/11 patriotic sentiment. Libeskind designed an asymmetrical tower that evoked the Statue of Liberty and stood at the same height as the original World Trade Center, topped with a spire rising to 1,776 feet. Pataki dubbed it the “Freedom Tower,” a name that became commonplace but had largely faded from the use by the time One World Trade Center opened.

In 2004, Silverstein’s preferred architect, David Childs, officially took over, with Libeskind staying on as the planner of the site. Childs’ “final” design, a symmetrical and more traditional tower that tapers into an octagon at its midway point and then back into a rectangular prism, was unveiled in 2005. The New York Police Department requested further alterations, most notably a windowless, solid concrete base. Meant to protect against truck bombs and other potential attacks, the base has been criticized as “a grotesque attempt to hide [the building’s] underlying paranoia” by New York Times architecture critic Nicolai Ourousoff.

Though its cornerstone was laid in 2004, construction on One World Trade did not begin until the summer of 2006. The slow pace of construction—the tower “topped off” in August 2012 and the spire was not installed until May 2013—was a frequent source of consternation for the building’s developers and the city. At the same time, it allowed space for the tower to become more than a reminder of what had been lost. As architecture critic, Kurt Andersen put it, “The fact that it’s taken more than a decade to finish, I think —the gradualism—makes that sense of emblematic rebirth more acute and irresistible.”

Prior to the opening, media conglomerate, Condé Nast announced that it would move its New York headquarters from Times Square to One World Trade Center, occupying floors 20 through 44. Its location and the legacy of the original World Trade Center made the tower a natural choice for many financial institutions, but the building’s developers made an effort to bring in a diverse group of tenants, including media and tech companies.

Known for its floor-to-ceiling, 360-degree views of Manhattan, Long Island, New Jersey, and New York Harbor, One World Trade is now one of the most notable features of the Manhattan skyline, a tribute to the buildings that preceded it but a 21st-century New York phenomenon in its own right.