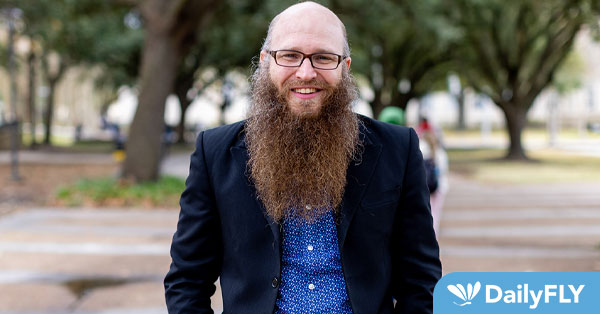 PULLMAN – Christopher Clarke loves putting animations of his disembodied head (and impressive beard) above images of charts and data.

“I want to help people better understand the world around them, and there’s almost always an economic angle,” said Clarke, a native of Las Vegas. “Economics isn’t just money, it’s the study of allocating resources. Every decision involves tradeoffs, and our field looks at those tradeoffs.”

Clarke posts around five videos each week on his TikTok feed, also cross-posting on Twitter. He selects topics based on current events, worldwide trends, or what he reads about in economic journals. He chose TikTok after thinking about which platform would let him make the biggest impact.

“My younger sister used to send me funny videos on YouTube, but I noticed she started sending me TikToks instead,” said Clarke, who earned a Ph.D. in economics from WSU. “I thought if that’s what younger people were using, that’s where I should go.”

That was February 2021, and he’s been posting and growing his audience ever since. He’s currently approaching 40,000 followers on the app.

“Economic decisions and motivations have broad impacts on our lives,” said Jill McCluskey, director of the WSU economics school. “I’m impressed with Dr. Clarke’s ability to reach out to a broad audience and explain complex topics and ideas in ways that are both entertaining and have real impact. We’re proud to have him teaching WSU students in the classroom and the public online.”

Clarke’s primary focus is public policy and income inequality, which have been frequent topics of his videos. He says the biggest advantage he has is the ability to read and understand economic academic papers and translate those in ways non-academics can grasp.

“Without a Ph.D., I couldn’t read the academic papers that inform these videos,” Clarke said. “If the public can’t understand the science in journals, then we need a more accessible format. I think TikTok is great for that.”

Clarke began editing and publishing educational videos in 2019 for an online course. He’s learned through trial and error and watching similar creations.

So far, his most popular video, discussing how policy changes around the world led to the healing of the ozone layer, has over 2.2 million views. He’s proud of how it shows that changes in policy can repair global issues.

“It’s not like the problem fixed itself; humans did it,” Clarke said. “It’s positive news and shows that humans can fix environmental problems.”

He’s also covered topics such as paying college athletes, the impact of Russian economic sanctions, inflation, and who pays taxes and why.

Clarke said creating the videos makes him a better teacher in the classroom. He reads the latest journal articles for both social media and the classroom, but the videos keep him more up to date on topics.

“I recently gave a lecture in class on minimum wage, which isn’t my area of expertise,” he said. “But I did a video series on the topic, so I was well versed on the various aspects and views on the subject. That happens quite a bit.”

Clarke believes the job of educational institutions like WSU is to research topics and disseminate that knowledge so the public can better understand the world around them.

“We live in a society where we can influence our government and public policy,” he said. “If there’s a better-educated public, then we can get better-crafted policies. It feels great knowing that people are seeing these videos and learning from them. It enhances my role as an educator.”