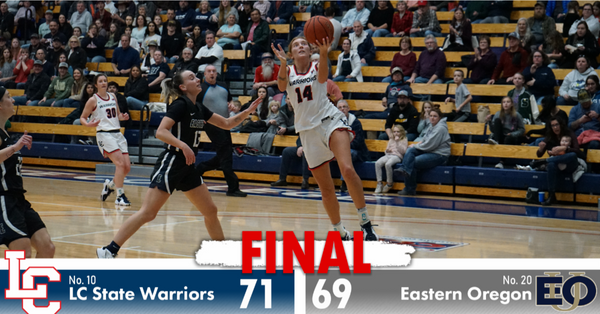 LEWISTON – The No. 10 LC State Women’s Basketball team survived a nail-biting battle against No. 20 Eastern Oregon to gain sole possession of first place in the Cascade Conference on Friday. The Warrior defense held the best shooting team in the CCC to its lowest field goal percentage of the season in the 71-69 victory, fending off a buzzer-beater to close out the contest.

Ellie Sander continued her hot streak with a team-leading 19 points and three steals.

With the victory, LC State is 11-1 overall and 6-0 in CCC play. The Warriors are the lone undefeated team in Cascade Conference action.

“What a great game,” Head Coach Brian Orr said. “Both teams played hard. I thought our defense did a great job of taking away the 3-point shot, especially in the first half. We had a few break downs in the fourth quarter and they (EOU) started to get hot from deep. But we survived a game-winning shot at the buzzer. Aside from the third quarter, we did a decent job of executing offensively. It was definitely another team win. Ellie led our starters but our bench played a big part in the win.”

EOU opened the game with a 4-0 run, but LC State answered with the next seven to take the lead. Sander put the Warriors on the board with an and-one play before Maddie Holm added a pair of free throws and Sara Muehlhausen hit a jumper to make it 7-4 at 5:16.

Mataya Green and Payton Hymas went back-to-back to keep the LC momentum going before a three-point play by Sitara Byrd put LC ahead 14-7 with 1:44 left in the quarter. Byrd and Hannah Broyles each added a basket to give the Warrior women an 18-13 edge after the first 10 minutes.

Three straight buckets by Muehlhausen, Byrd and Sander pushed the advantage to 24-15 two minutes into the second frame. Hymas and Holm each converted on a pair of foul shots, and a run of six with tallies by Sander and Muehlhausen gave LC a 34-21 cushion at 3:53. EOU began to chip away at the lead with LC ahead 39-31 at the break.

The Mountaineers outscored LC State in both quarters of the second half, but the Warrior defense stepped up to maintain the slim lead. EOU opened the third frame with six straight points before a layup by Sander cut the run. The Mounties rallied to take the lead on eight straight points to make it a 48-47 game with 1:01 left in the third.

Free throws by Green gave LC a one-point lead, 49-48, and a steal and layup by Hymas sent the Warriors into the final quarter ahead 51-48.

Jumpers by Muehlhausen kept the Warrior women in front by five in the first minute of the fourth frame. EOU rallied once more to cut the margin to one but a short burst by LC made it a six-point difference. Sander made good on two foul shots and Holm drained a 3 to give the Warriors a 63-57 advantage in the final six minutes.

EOU evened the score once more with 30 seconds to play. Tied at 69-69, Muehlhausen hit a jumper to give LC the lead before the Warrior defense denied EOU a game-winning 3 at the buzzer.

Sander tied for the game-high with 19 points on a 7-for-13 night from the field. She grabbed eight board and three steals. Muehlhausen added 12 points and three blocks, giving her a career total of 121 for third all-time at LC State.

Holm led the defense with 10 rebounds and Callie Stevens dished out three assists.

LC State went 17-for-19 (.895) from the free throw line and forced 19 EOU turnovers. The Warrior defense held the Mounties to a .346 performance from the field.