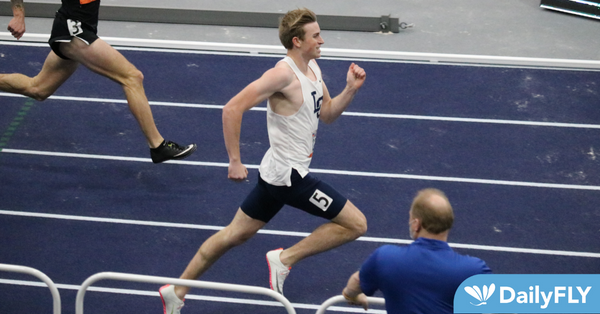 SPOKANE, Wash. – Four records fell and a spot at nationals was clinched at the first indoor track and field meet of the season for LC State. Lewiston natives Madigan Kelly and Anika Grogan picked up where they left off last season, while London Kirk continued to make dents in the record book. Freshman Trenton Johnson made his transition from cross country to field events one to remember with a record in the triple jump.

The Spokane Invitational provided a great glimpse into the future of LC State Track and Field with a large group of freshmen getting their first taste of the collegiate level.

“Pretty awesome day for our first meet of the year,” Head Coach Mike Collins said. “I’m pretty impressed with the resiliency of these athletes and their ability to meet challenges both out of practice and the competitive arena, as well as in it. We set four school records today within a program that has already been performing quite well, so that says an awful lot. We had our newer athletes contribute a lot today and our returners definitely helped provide an example of how we need to come in and approach these meets, as well as what it means to be a Warrior.”

Similar to last season, Kelly’s first run of the year resulted in a program best. The sophomore edged high school and college teammate Grogan’s mark in the 60m dash with a time of 7.96 to place in the top 20. Grogan finished 23rd overall (8.03).

Kelly also punched her ticket to nationals with an A mark in the 60m hurdles. She claimed 11th overall with a time of 8.94 at the invite level. Sara Hathaway was seventh in the open race with a time of 9.22, and Ashley Britt was 15th (9.56).

Abigail Peightal ran a personal-best mile time of 5:30.16 to finish 10th in the event. The team of Collins, Grogan, Hathaway and Keelyn Pilcher finished eighth in the 4x400m relay with a time of 4:00.41.

Cynthia Smith tied her career-best in the pole vault with a mark of 3.30m to place seventh. Emberlynn Mack and Desiree Winslow tied for 11th with an identical 2.75m mark.

Johnson, also a member of the LC State Cross Country team, showed that he is a threat in track and field as well with a school-record in the triple jump. He set the program-best mark in his first attempt at 13.09m before bettering it a few attempts later at 13.54m. He finished seventh in the event.

Zayne Maughan earned a share of the No. 2 spot for the LC State indoor pole vault record. He cleared a height of 4.45m to finish eighth at the meet.

In his first collegiate race, Justin Krabbenhoft ran the third-fastest 60m dash in program history with a time of 7.21. He finished 20th at the meet, with fellow freshman Jordan Castillo in 30th (7.37). Castillo also had a strong 200m with a 31st-place finish (23.60).

The men’s 4x400m relay ran the third-fastest relay time for LC. Blaker, Ike Hopper, Kirk and Krabbenhoft combined for a time of 3:27.01 to finish sixth at the meet.

Krabbenhost was also in action in field events and tied with Braden Wuthrich for the third-best high jump in Warrior history. The freshmen duo hit a mark of 1.90m to finish ninth and 10th, respectively, and Gardom was 14th (1.75m). Moore leapt to a career-best 1.70m to take 16th.

Fifth-year senior Jacyob Atencio hit a massive PR in the weight throw with a distance of 14.32m. The mark ranked third all-time at LC and earned a ninth-place mark. Three freshmen also competed in the event, with Jon Wattles in 20th (11.81m), Tanner Beltz-Childs in 22nd (10.79m) and Sam Weller in 24th (10.37m).

Andrew Tilton took 36th in the long jump (5.53m) as LC’s lone representative in the event.