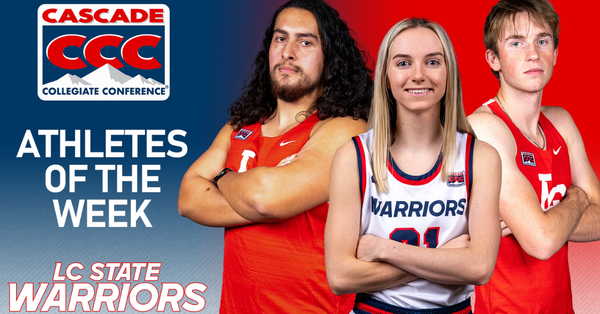 CORVALLIS, Ore. – Three LC State student-athletes earned Cascade Conference Rize Laboratory Athlete of the Week honors on Monday for competitions during the week of Jan. 9-15. Callie Stevens earned her second nod as the Women’s Basketball Player of the Week, while London Kirk and Jaycob Atencio swept the CCC men’s track and field honors.

Stevens had a dominant weekend with 20 points in back-to-back games. She led the No. 10 Warriors in scoring in victories over Oregon Tech and No. 23 Southern Oregon to help LC State remain perfect in Cascade Conference play. The junior shot .500 (14-for-28) from the field and .563 (9-for-16) from 3-point range. Stevens dished out 10 assists between the two games.

The Warrior women continue the homestand with contests against Evergreen State and Northwest on Jan. 20 and 21.

Kirk set a pair of LC State records at the Spokane Indoor Challenge on Saturday and earned his first national-qualifying mark with a B standard in the 400m. The Deary, Idaho, native clocked a time of 21.99 in the 200m and 49.06 in the 400m to finish in the top-10 of each event. His 400m time is the 12th-fastest in the NAIA this season.

This is the first weekly honor of Kirk’s career.

Atencio threw a personal-best distance of 14.98m in the weight throw to improve his spot at third in the LC record books. He placed eighth at the meet in the event, and also saw action in the shot put where he placed 41st (9.39m).

This is the first weekly honor of Atencio’s career.

Kirk, Atencio and the rest of LC State Track and Field will be in action on Jan. 21 at the Lauren McCluskey Memorial Open in Moscow.