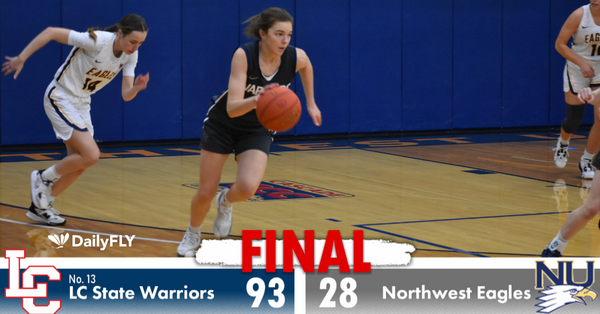 KIRKLAND, Wash. – Callie Stevens single-handedly outscored Northwest University on Friday night in No. 13 LC State Women’s Basketball’s 93-28 rout of the Eagles. The Warrior women dominated all aspects of the game with efficient shooting and lights-out defense. Stevens notched a career-high with 32 points in the contest and the Warrior defense held NU to a .190 shooting percentage.

The Warriors improve to 5-1 on the season and 2-0 in Cascade Conference play.

“Definitely a fun game for the Warriors,” Head Coach Brian Orr said. “We got out to a fast start and never looked back. I was really happy with the way we pushed the ball in transition, and our defensive pressure and rotations took them out of their normal offense. We shared the ball well all night. It was a total-team victory.”

Stevens was a one-women wrecking crew with eight points in two minutes to give LC an 8-0 lead. Sara Muehlhausen drained a free throw before a layup by Hannah Broyles pushed the advantage to 11-1 at 6:47. Stevens added another two points to make it a 13-1 run.

NU held LC off the board for a few minutes before Payton Hymas fought her way to the net and completed a three-point play with a free throw. Broyles netted a 3 at 1:57 to make it 19-9 at the end of the first quarter.

The Warrior defense was even tougher in the second frame and allowed just three points in the 10-minute period.

Stevens drew first blood with a jumper a minute in, and free throws by Lindsey Wilson and Adyson Clabby made it 25-9 by 7:47. The offensive barrage continued with a layups by Stevens and Clabby before Northwest scored its only basket of the quarter at 5:59 to bring the score to 29-12. Broyles made it a 20-point difference, 32-12, before a bucket by Stevens gave LC a commanding 34-12 lead with 4:56 to play in the half.

Stevens and Ella Nelson each added a triple before Clabby notched an and-one play to grow the cushion to 43-12 at 2:23. Mataya Green tallied two free throws in the final minute to send the Warriors into the break ahead 45-12.

The Eagles struck first in the second half before Muehlhausen answered with a basket of her own within the first minute. Muehlhausen, Broyles, Clabby and Stevens went on a run to combine for 19 straight Warrior points to give LC a 50-point, 64-14, lead midway through the third quarter.

Stevens’s third 3-pointer of the frame capped the scoring run at 22 points at 4:18, and Clabby answered a Northwest basket with a triple shortly after. Freshmen Sitara Byrd and Wilson scored back-to-back baskets before Ellie Sander made it three in a row as the Warriors took a 76-21 lead into the final 10 minutes.

Northwest scored first in the fourth frame, and Muehlhausen scored first for LC State in the first two minutes. Wilson added eight points, Sander tallied four and Hymas scored two in the final minutes of the contest as LC cruised to a 93-28 victory.

Stevens led all scorers with 32 points, Broyles scored 14 and Wilson tallied a career-high 11. Muehlhausen led on the boards with 10 rebounds and Wilson grabbed a personal-best nine.