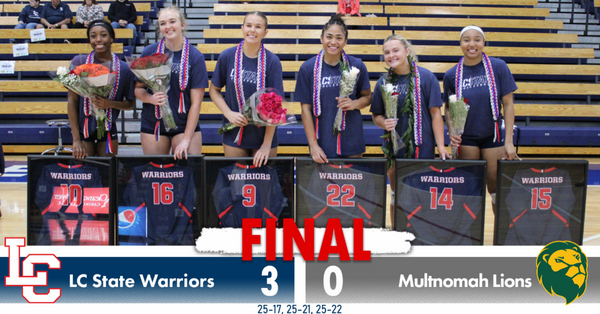 LEWISTON– In an emotional night in the P1FCU Activity Center, Warrior Volleyball celebrated its six seniors prior to taking on the Multnomah University Lions. LC State honored the contributions of Cassidy Nelson, Jada Wyms, Kendzee Cloward, Channa Hart, Carli Berntson, and Lisi Langi with a 3-0 sweep (25-17, 25-21, 25-22).

Grecia Ung Enriquez was electric for the second night in a row with 16 kills and six aces. With the victory, LC State is 12-8 in Cascade Conference play and very much in the hunt for a spot in the conference postseason tournament.

“Glad to be able to come away with a win for our seniors,” Head Coach Shaun Pohlman said. “They have contributed in such large ways to get this program going in the direction we want it to go; they are a special group with huge positive influences on their teammates and are great examples for our underclassmen.

“The match wasn’t our best performance for sure which is unfortunate, but we don’t have time to dwell on that,” Pohlman added. “We have our last conference matches on the road against two incredibly tough teams, then we have a conference tournament we need to make sure we are preparing for as well. We are very close to reaching that end-of-season team we want to be so now is a great time to reach that peak every team strives for in postseason.”

The Lions had the hot hand and opened the match with a 6-3 run. Three points, including a block by Wyms and ace by Ung Enriquez, erased the deficit and evened things up 7-7. MU rallied once more to pull ahead 12-10, but six straight Warrior points on kills by Kenzie Dean and Ung Enriquez, as well as back-to-back aces by Nelson, put LC in front 16-12.

A block by Wyms and Langi, followed by an ace by Dean, pushed the advantage to 20-14 before LC ended the set with kills by Wyms and Nelson, and two Ung Enriquez service aces.

Multnomah began the second frame with a 4-1 run and maintained the lead until a kill by Langi evened the score 11-11. The Lions regained the advantage at 15-12, but a massive nine-point rally by LC State put the Warriors firmly in the lead. Dean tallied an ace in the stretch, Jennah Carpenter had two kills, Wyms added one and Ung Enriquez notched three to make it 21-15 LC State. Ung Enriquez closed things out with a kill and an ace at 25-21.

The Lions began the third set in a similar fashion and jumped out to a 6-3 lead. A kill by Nelson and ace by Ung Enriquez tied the frame 6-6, but another run by MU had the Warriors trailing 12-8. LC played from behind as late as 20-16 until a massive six-point run gave LC a 22-20 lead. Langi slammed down three kills to fuel the run and assisted on a block with Hallie Seaman. Ung Enriquez had the final three kills of the match to end things 25-22.

Ung Enriquez led the match with 16 kills and six aces with a .314 attack percentage. Langi added 10 kills at .364. Carpenter dished 26 assists and Dean had 15 digs.