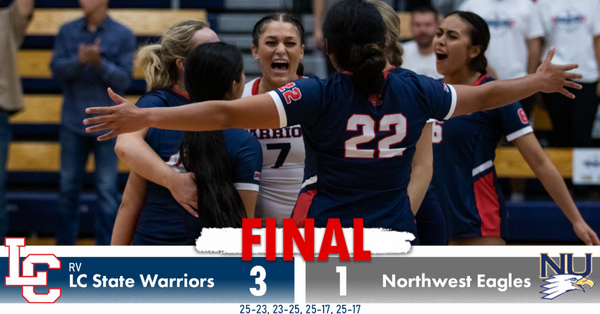 Grecia Ung Enriquez and Cassidy Nelson combined for 30 kills, setters Jennah Carpenter and Esther Kailiponi orchestrated the efficient offense, and Kenzie Dean had her fifth match of the season with at least 20 digs.

“Pretty happy about the response after our performance last week,” Head Coach Shaun Pohlman said. “The team was crisp, quick to move from play to play, and there were some really long rallies and relentless pursuit tonight. Our passing really came together in the third and fourth sets which allowed us to set up our hitters, and Jennah and Esther did a great job running the offense tonight for our hitters to terminate. It was a great team effort all around tonight.”

The Warriors got off to a fast start with a kill by Nelson and ace by Kailiponi. Kills by Lisi Langi and Ung Enriquez kept LC in front 6-4, and back-to-back terminating swings by Nelson made it 9-6.

Langi sparked a four-point stretch to push the margin to 16-12, and kills by Ung Enriquez, Juliauna Forgach Aguilar, Jada Wyms, Nelson and Langi helped push the score to 23-19. Northwest rallied to pull within one, 23-22, but an Eagle error and kill by Channa Hart ended the set 25-23.

Back-to-back kills by Nelson and one by Langi guided the Warriors to a 4-0 advantage in the second frame. Northwest answered to tie things up 7-7 before another burst made it 11-8 in favor of the Eagles. A kill by Madison Kammuller and ace by Ashlee Bachman evened the score 11-11, and the teams battled back-and-forth until a short run had Northwest up 17-14.

The Warriors put together a 6-1 run with kills by Forgach Aguilar, Ung Enriquez and Hallie Seaman, and an ace by Carpenter, to pull ahead 20-18. The Eagles responded to regain the lead to 22-20 before finishing off the set with a kill and an ace at 25-23.

LC State used kills by Nelson, Ung Enriquez and Wyms, an ace by Dean and block by Wyms and Langi to take a 7-4 lead early in the third frame. Hart and Langi teamed up on a block to make it a five-point difference at 13-8, and two straight kills by Langi made it 15-9. Three Northwest attack errors and two kills by Wyms gave LC a 22-13 advantage before Nelson closed out the set 25-17 with a kill and an ace.

Nelson stayed hot with a kill for the first point of the fourth. Ung Enriquez tallied back-to-backs kills to grow the difference to 6-4 as the Warrior lead continued to grow. Langi launched a five-point stretch that included a block and Wyms and Langi and was capped by two straight aces by Dean to make it 19-12.

Forgach Aguilar and Nelson went back-to-back before a kill by Hart made it match point, 24-17. A Northwest error ended the match 25-17.

Nelson led the match with 17 kills on a .240 attack percentage, and Ung Enriquez added 13 at a clip of .333. Langi tallied 10 kills to go with four blocks. Carpenter led the setters with 24 assists and Kailiponi dealt 23. Dean led the defense with 21 digs, Kendzee Cloward collected 11 and Kammuller had 10.