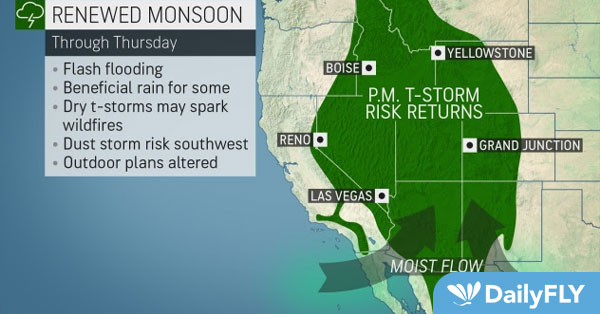 LEWISTON – After weeks of abnormal weather in the western half of the country, AccuWeather meteorologists say that a cooldown is in sight for many. For some, this temperature change will be accompanied by a surge in monsoonal moisture, providing drought relief during a typically dry time of year.

In recent days and weeks, those in the western United States have proven to be no stranger to volatile, abnormal weather. With dangerous flash floods from the North American monsoon, days of extreme heat, and an abnormal tropical storm in Southern California, conditions across the Intermountain West have been anything but normal.

As of Sept. 10, conditions in the month of September across parts of the West have been characterized by stifling, unrelenting heat. The worst of this was felt in California, where numerous locations broke all-time high-temperature records by comfortable margins. In the state capital of Sacramento, Tuesday’s high of 116 F was the hottest ever for the city, and temperatures are running an astonishing 12 degrees above normal for the month.