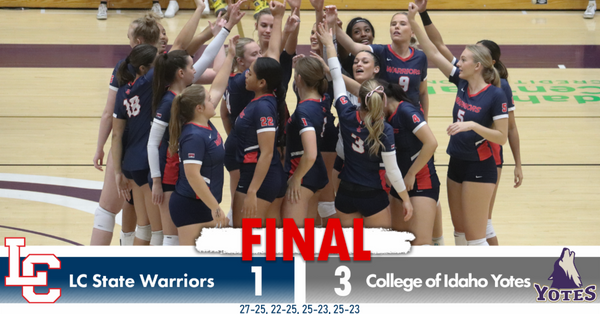 “It was a rough night,” Head Coach Shaun Pohlman said. “We had nothing working. We played tight and we didn’t do the things we said we would do. It’s tough playing a team that has nothing to lose when we have a target on our back after receiving votes in the national polls. It certainly puts all the pressure on us and we weren’t ready. I hope we all examine that and get a chance later in the season to prove that we can handle it.”

After two points by the Yotes to start the match, a swing by Lisi Langi put the Warriors on the board. Grecia Ung Enriquez evened the score 3-3 with a ball tipped over the net before giving LC State the lead with a solo block. C of I answered to tie the frame 6-6, but back-to-back kills by Ung Enriquez and Carli Berntson put the Warriors back in front 8-6. An ace by Ashlee Bachman gave LC a three-point edge at 10-7, but the Yotes rallied once again to even things up at 11.

A pair of kills by Jada Wyms and one by Ung Enriquez gave LC momentum before an ace by Kenzie Dean made it a 15-12 Warrior advantage. C of I rallied once more to tie the set before regaining the lead, but back-to-back kills by Berntson and Wyms made it a back-and-forth battle. Channa Hart teamed up with Ung Enriquez on a block to give LC the lead at 24-23, and a kill by Langi fought off a set point to tie things up 25-25. C of I rattled off two straight to take the set 27-25.

The Yotes jumped out to a 2-0 lead in the second frame before growing their advantage to 7-3. A pair of C of I errors were followed by a kill by Cassidy Nelson to bring the Warriors within one, 7-6, and a kill by Nelson and ace by Bachman tied the set 8-8. The Yotes went on a run to stretch their lead to 18-14 but the Warriors were not easily turned away.

A pair of kills by Berntson sparked a six-point rally to put LC State back in front. Bachman added an ace before back-to-back kills by Nelson gave LC a 20-18 lead. A C of I attack error pushed the run to seven stretch Warrior points and forced a timeout. Wyms put up a solo block to make it eight in a row and a 22-18 advantage. The Yotes kept the pressure on with two straight kills to pull within two at 24-22, and a kill by Wyms ended the set 25-22.

The Warriors turned the tables and scored first in the third frame on a kill by Langi. She teamed up with Wyms on a block to keep LC in front 4-2 and Wyms notched a kill of her own to make it 6-3. Juliauna Forgach Aguilar tallied her first kill of the match before a burst by C of I tied things up 9-9.

Langi and Forgach Aguilar went back-to-back with big swings and an error by the Yotes capped the three-point run with LC ahead 13-10. C of I scored four straight to take a 14-13 lead and pushed the margin to 19-16. A kill by Wyms and ace by Esther Kailiponi brought LC within one, 21-19, and back-to-back kills by Ung Enriquez and Wyms kept the Warriors in the hunt at 23-21. Forgach Aguilar blew a ball past the C of I defense for LC’s third straight point to make it a one-point deficit, and a block by Langi and Wyms fought off a set point at 24-23. The Warriors could not complete the comeback and dropped the set 25-23.

Wyms, Ung Enriquez, and Hart each notched a kill to even the fourth frame 3-3. Ung Enriquez and Hart denied C of I at the net to put LC in front 4-3 and cap a three-point run, and another kill by Hart kept it a one-point lead at 5-4. Ung Enriquez followed with back-to-back kills and an ace by Vanja Tomic pushed the run to four LC points in a row. A 7-1 surge by the Yotes was snapped by a kill from Ung Enriquez and followed by a solo block by Wyms to tie things up 11-11.

Wyms and Forgach Aguilar tallied kills as part of a 4-1 LC State run to knot the set 20-20, but C of I responded with a pair to regain the lead before closing out the match with a 25-23 final.

Wyms led LC State with 13 kills on a .417 attack percentage. She led the Warriors at the net with four blocks. Ung Enriquez tallied 10 kills with three service aces and Kendzee Cloward tied a career-high with a match-best 21 digs.

LC State continues the weekend with a contest against the top team in the NAIA, No. 1 Eastern Oregon. First serve is set for 5 p.m. in La Grande, Ore.

Stay up to date with all things Warrior Athletics at lcwarriors.com and on social media @LCWarriors